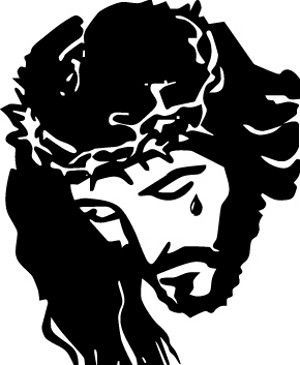 844 Views
Vision: Image popped up of Jesus in black line art with a crown of thorns on his head with sweats of blood on his cheeks. Jesus sweat blood from praying so hard bc of his death on the cross where they would put the crown of thorns on his head. Luke 22:44 And being in an agony he prayed more earnestly: and his sweat was as it were great drops of blood falling down to the ground. (He suffered for us and it was not easy for him, but his love was so great to do this. This was the way for our sins to be forgiven, for him to be a sacrificial lamb and the final sacrifice. It took pure loving human blood to wipe away our human sins. Yet we take sin lightly like no big deal, knowing Jesus died for it long ago. God does not ask much, and his request in commandments is a foundation for our own good to live in peace with one another and God. Thou shalt not kill or steal…How is that bad request? He is a good God and wants good children…TRY to be pure and if you fail ask for forgiveness from a God of grace. He knows our hearts (Jeremiah 17:10, 1 John 3:20) and Romans 8:27 And he that searcheth the hearts knoweth what is the mind of the Spirit, because he maketh intercession for the saints according to the will of God).
———————————————————————————–
Words: Unicorn (There is actually a scripture that talks ab unicorns and for the longest time I was like oh cool there will be unicorns in heaven lol, but God wanted to clear this up apparently. The original meaning could be a wild oxen)… “God brought them out of Egypt; he hath as it were the strength of an unicorn.” (Numbers 23:22, KJV)
“The KJV has been criticized for mentioning creatures that are supposedly mythical. Unicorns are one of them. However, unicorns are not mythical creatures. They are called Rhinoceros Unicornis (Indian Rhinoceros) and each one has one horn on its head. “Unicorn” simply means “one horn.” The KJV margin for “unicorns” in Isaiah 34:7 reads “Or, Rhinoceros” so the KJV translators were not foolish as to think of the unicorn as the mythical horse with a magical horn.”
Please read more here: http://www.kjvtoday.com/home/unicorn-or-wild-oxen-in-numbers-2322-et-al
—————————————————————————————-
Vision: Saw a quick vision of a white card like background with a blue truck in it.
Dream: Two girls who appeared to be models trying to get me to go to florida with them.
Dream: My mom bought me lotto tickets and showed 700 dollars, but had to match the other scratches to it. I was confused what to do with it.