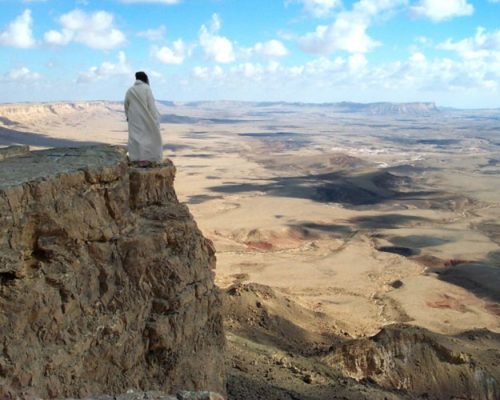 1,269 Views
I saw a vision of Jesus standing behind a brown old podium looking thing and it appeared he was reading something and looking out over this mountain and I could not tell what he was looking out at, but was similar to the image I am attaching. I later asked God in a dream…where were you? I heard the words “Mount Sinai.” I know Mt. Sinai is where the ten commandments were written by God for Moses to show the Isrealites who waited below the mountain for him to come down. Jesus wrote those ten commandments (See Exodus 24:12 below)…because Jesus is God. ( John 14:8 Philip saith unto him, Lord, shew us the Father, and it sufficeth us. 9 Jesus saith unto him, Have I been so long time with you, and yet hast thou not known me, Philip? he that hath seen me hath seen the Father; and how sayest thou then, Shew us the Father? Many other scriptures prove Jesus as God.”
Exodus 24:12 shows that this is an incorrect assumption that Moses wrote them. There, God instructed Moses, “…Come up to Me into the mount, and be there: and I will give you tables of stone, and a law, and commandments which I have written; that you may teach them.” Also, Exodus 31:18 states that God “…gave unto Moses, when He had made an end of communing with him upon Mt. Sinai, two tables of testimony, tables of stone, written with the finger of God.”
Also notice: “The tables were the work of God, and the writing was the writing of God, graven upon the tables” (Ex. 32:16). These were the stone tablets that Moses later broke (vs. 19), when finding the Israelites worshipping the golden calf. God later commanded Moses (34:1), “Hew…two tables of stone like unto the first: and I will write upon these tables the words that were in the first tables, which you broke.” God (YHVH-“the LORD”) clearly stated that HE would write the Ten Commandments again.”
References with scriptures:
https://rcg.org/questions/p128.a.html
http://bugman123.com/Bible/JesusIsGod.html
I also saw an image of me with a single tear on my cheek. I heard “This is a spiritual tear”
I dreamed also of being in front of a lake and was dark all around me. Was like a campsite. I walked to the lake and a red beam of light shined down directly at my neck from the sky. It was so strong I could not move and I felt this physically also. I was afraid and did not know where the light came from but appeared to be like alien’s(which are demons in disguise) My arms were so heavy, but I remember trying so hard get my hand to my neck and barely could to make it stop, but then I asked for Jesus to help me and it stopped instantly.