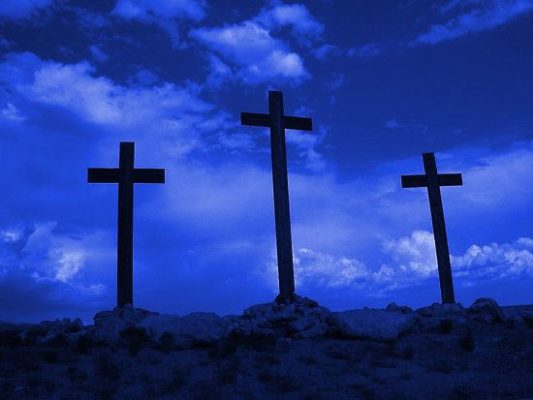 825 Views
I saw a quick vision of three crosses with three men on them. The center was an older man with white hair and I thought in my mind he was Moses and on the outer two was two saints. I believe God is saying all prophets and saints had/have a cross to bear like Jesus. Luke 9:23 And he said to all, “If anyone would come after me, let him deny himself and take up his cross daily and follow me. The world will not understand you, and so things will not be as easy, but God promises to be there every step of the way. John 15:18-27 …18 If the world hate you, ye know that it hated me before it hated you. 19 If ye were of the world, the world would love his own: but because ye are not of the world, but I have chosen you out of the world, therefore the world hateth you. Jesus is saying he has overcome the world and he will send all those who choose to follow him a helper, the holy spirit (the comforter). John 14:16 And I will pray the Father, and he shall give you another Comforter, that he may abide with you for ever. We have help here, and was not left to just live and die. God’s word comes to life and is powerful! More scriptures references regarding the helper below.
Strong Man Update: I was waking when I saw the words “Stronger man” and “Stronger Coming” Then I saw a vision of a guy sitting on his front porch and he had a red ball cap on turned backwards. I was looking at him from behind and could not see his face. He could have been praying. Who is this guy God keeps talking about?Scriptures about the comforter:
John 16:7 But I tell you the truth, it is for your benefit that I am going away. Unless I go away, the Advocate will not come to you; but if I go, I will send Him to you.
John 7:39 He was speaking about the Spirit, whom those who believed in Him were later to receive. For the Spirit had not yet been given, because Jesus had not yet been glorified.
1 John 2:27 And as for you, the anointing you received from Him remains in you, and you do not need anyone to teach you. But just as His true and genuine anointing teaches you about all things, so remain in Him as you have been taught.