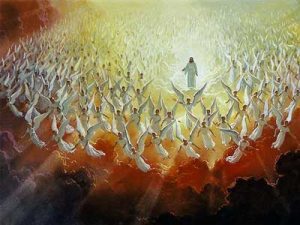 929 Views
Lately I have been going through some terrible trials with Satan mostly in my head. I learned not to focus on the physical dark more than the light and faith. I am pressing into to God more and learning his ways, but not without a lot of tribulations. I don’t have a job, running out of money, got pulled over, husband doesn’t want to be with me, my son is going through terrible teenage years and hating me, and my car broke down and can’t be fixed and more… God did give me two messages today, one from the prophetess I listen to sometimes and another on a show that said, “Fear has moved in where trust should be!” Even though it was a kids cartoon I knew it was from God. He’s been using that word “Trust” a lot with me lately, so I looked up the words online and it brought a scripture that I felt was from God Psalm 46:2. It was about trusting and hoping in God.
I dreamed a few nights ago I was sitting on a chair in the middle of what looked like a track. There were four rows of men in white shirts and white shorts and socks and shoes. They all seemed to look similar. They started running and at first I could see them, but then they ran so fast it was like the speed of light fast and I could no longer see them but wind. I felt the wind and even felt like something hitting me every now and then maybe a type of electricity I am guessing when the angels touched me, but it did not hurt. I tried to open my eyes a few times, but kept closing them due to the strong winds and afraid something would hit my eyes. I did keep them open one time and noticed the angels forming a light from their running. I am guessing it was the entrance to heaven. It was really cool though.
Great encouragement site:https://formerheathen.wordpress.com/2012/07/30/god-will-bring-justice-into-your-life/