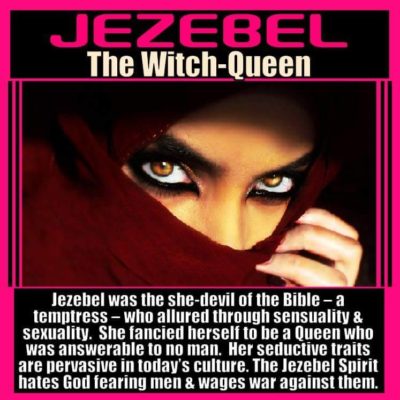 I felt the holy spirit come over after I woke and was trying to go back to sleep, so I knew God had things to share…I also have many things to add from the week…
Dream of Jezebel Spirit: I didn’t know much about this spirit, but heard things about her from other’s and scriptures. Last night I dreamed of her and she was beautiful yet powerful and all the men were afraid of her and hiding, but one came up to her and offered her sexual pleasures out of fear. She looked at me and said they think I want them and became angry and boastful. She was trying to win me over to be the same, but I knew she was evil and I even feared her bc I saw and knew of her power. She continued to try to get me on her side tho. Everything around was dark and torn down, men were hiding all over. I could see her power radiating all over her. She was causing chaos with it. I found scripture relating to Elijah also fearing her and it relates to me as well and what I am going through in the wilderness. God has told me I am in the wilderness before I got this below in a vision and it is not an easy place to be in. I am constantly tested and tried and she came to tempt me.
https://www.gotquestions.org/Elijah-and-Jezebel.html

https://www.jamesevans.ca/identfy-and-destroy-a-jezebel-spirit/
——————————————–
Dream of Birthing: This is a spiritual meaning as God has revealed to me several times about birthing something new into us. This time I dreamed I was giving birth and I felt it in me and was getting ready to have it. The nurse came and said..”It’s Time” Whatever God birth’s in us has a session to spring forth.
Dream: I dreamed I was in a contest and made Queen bc I came in second place. Seemed a guy was first place, but I can’t remember his name.
Dream: I dreamed I was in an art contest and I was good at it and drawing images on the chalkboard also, and we were in a group competing, yet the blue team came in and hid all our stuff and won the contest.
Dream: I saw ppl running and hiding in a power plant bc of poison smells from the plant leaking out.
Dream: I saw a friend I just recently met and he was with a wife and she had like a daughter with her. She appeared to be japanese. I later played the game I like to play and there was a guy who I was reading ab him and he had a girl who was japanese he loved. Exactly after this I met with my friend and asked if he had a wife and he did. I think my dreams are jumbled together with what will happen in a specific instance. I am seeing this more and more. We have to learn God’s lingo in our dreams, but the more he shows…the more I see how he speaks to me personally.
Vision: I saw jesus as a statue again and he was under water this time with his hand reaching up.
Vision: I saw a name(I won’t reveal) and then I saw the word “New”
Vision: I saw two tatts One with the word “Rose” and the other “Wilderness”…Then I saw a tatt that said “Love”
Vision: Another night I also saw the word “Love” and “I love you”
Especially when i am being attacked spiritually…God speaks louder….I kept seeing the word “Paradise” all day yesterday. These words stick out in my spirit and not like normal words do.