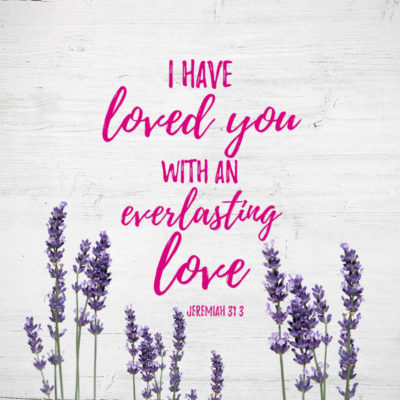 God said “Forever Love” I saw first the word “forever” in white letters, and then I saw on the back of a pink tshirt the world “love” all in the same font type…kinda cursive looking.
God’s love is forever: Jeremiah 31:3 The Lord hath appeared of old unto me, saying, Yea, I have loved thee with an everlasting love: therefore with loving kindness have I drawn thee.
———————————————
Vision: I had a vision of Jesus in a frame, but he was very far away. I know this is a message to me that I have been distant from him lately. I know it’s true. I have had one distraction after another lately and he desires fellowship with us.
Vision: I saw a walmart bag full of something and tied at the top.

I saw in white letters “Best of the work” It’s his best work, not ours.
Vision: I had a vision of a man with jeans on and no shirt and he had tattoo’s on the front of his body closer to the top by his shoulders. He had a black cowboy hat on and I believe his head was shaved or very short. The color was brown or dark brown. He appeared lightly tanned and had small muscles, but not too big.
Dream: There was ice everywhere and my grandpa asked if I was going to work and I said “No”
Dream: Someone was trying to kidnap a couple girls who were elementary age and who were left home alone. This young guy was hiding in their closet. They had a pool outside of the home. I know one of the girls had dark hair and curly a bit.
Dream: I dreamed of a bank robbery and the guy was using the janitors keys that were left in one of the doors for him. I was flying and watching him. I also saw two other guys trying to rob two ladies and I tried to stop them, but got shot.
Dream: I was dreaming of being on a date with a few guys who had like jewish culture and other nationalities similar. My dad set up the dates and was telling them to tone it down with his hand. One guy was trying to impress me with some veggie dip he made, but I didn’t like any of them. I know God uses symbolism a lot and my dad could represent him allowing me to date or choosing a mate for me. Right after this I passed by a guy I saw who I thought to myself, “Is he the one”. This guy is a preacher in rl.
Dream: A bunch of insects invading some animal place.