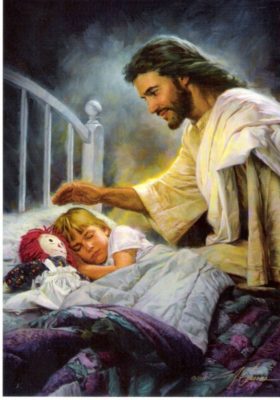 Dreams/Visions: 12-29-19
Jesus was watching me sleep. I was praying about something disturbing me, then fell asleep. I woke feeling Jesus presence and then I saw him leaning over watching me sleep in a vision. I fell back asleep and saw him again watching me. I felt his love for me like a father adoring their child. I still can’t believe how much he loves me and all his children he created like this. The biggest question I get from so many people is, why would God choose you and tbh Idk fully. The only answers I can give is he knows my true heart, he knows my true desires for him and to follow his will even with consistent adversity, and my love is genuine for him. I seeked to be closer and I tried to follow him the best I can out of love and respect for all he did for me. I am in no way perfect trust me, only Jesus is perfect. I just wanted to be a woman after his own heart since I was very very young. I am humble and don’t think I am better then anyone else and as a matter of fact I often tell Jesus other’s deserve to be chosen more then me. He also knew I would incline my ear and learn to hear him, I would set aside all my past learning and religious beliefs and get the gift of tongues. Also, I asked for the baptism of the holy spirit and got that also and learned he is spirit and how to operate with his spirit rather then my own flesh way’s of thinking. I use these gifts for his glory. I seek to give him the glory over myself. So maybe it is a combo of things idk, but this is the best answer I can give to those who keep asking this question.
Psalms 121:3 He will not suffer thy foot to be moved: he that keepeth thee will not slumber.
Matthew 28:20 Teaching them to observe all things whatsoever I have commanded you: and, lo, I am with you always, even unto the end of the world. Amen.
———————————————————-

Dreams/Visions: 12-28-19
Vision: There were two visions back to back. The first I saw Smokey the bear image, then next to it I saw the words “leave”, then next to that I believe it was “why?” The second vision after this I saw a man’s hand flipping a silver metal rectangular box that was either a lighter or matchbox. I believe this was a personal message about something I prayed for that night and it was pretty clear not to play with fire and I should probably leave because I already got the answer the same other times. Jesus always responds to me in his will. Just as he said in his word. There are steps to get to his will for your life though and if you want to know how, send me a private message.

Dream: I saw a date written down of January 20, 2020 and tbh I don’t know what this is for or remember the dream fully. I did see the date though on something and felt maybe it was for my personal journey.

Dream: I met with a lady and a group of us followed her through this building like a marine place that was all white with white walls, stairs etc…I remember seeing a couple stairs broken and thought this all is a vision I had prior. The walk ways were very narrow and many long hallways and pathways. It was like I was walking out my past visions now. Starting to see them come true.

Dream: I was in a church helping and I remember thinking I should preach because I have so much knowledge from God, but no one would believe me I thought. While the church was empty I started pretending I was telling them about my prophecies. After this the church was in session and one girl was there at another point and they were playing music in the church. She would play the same song twice and It was like I had some authority at this church and told her you should probably only play the songs one time and I don’t think she liked what I said. I remember thinking to myself, am I being too bossy?

Dreams/Visions: 12-27-19
Dream of ex trying to be with me and something about me working in office, yet he tried to take some of my stuff and I told my son no he can’t and needs to order his own. It seemed my son was gonna agree with him and go with him, but didn’t. My mom was getting promoted in some way.

Dream I was looking at neighborhoods, but not for myself. My sister had us go get a ladder from a neighbor who said she could use it and the guy ended up having a man bun with a cute sincere smile with innocent face. I ended up having to go back to get the ladder and made myself presentable just in case I saw him. I think he may have had a gf, but not sure. My brother was with us and wanted to walk, but I said it would take double the time if we just drive and he said no. He didn’t believe me.

I saw a vision of a check folded on some kind of white board faced up. It was possibly white marble.

Dreams/Visions: 12-26-19
I dreamed about a grave my uncle was in and his daughters missed him and would go hang out and play games just to try to be near him. There were two spies and we were being watched, but was too smart for them and got away. I honestly don’t know who I was with, but maybe more then one person.
We ended up going to a school and the time to start was just about over before they closed the doors or you were considered late, but I saw them close the doors and thought I didn’t make it, and all the teachers started moving with the students to class, but I started to run and one student put their hand to stop the door just as I got there to let me in and some other’s. We went into a cafeteria where I had on shades that looked lightly shaded on the top part if there was light, but when it was dark they were crystal clear. Some students told me that bc I was asking why the teachers weren’t saying anything about my glasses I thought weren’t allowed. It was like I was trying to be different or hide myself from teachers or others as a comfort for myself, and so they looked past the small disallowed rules.