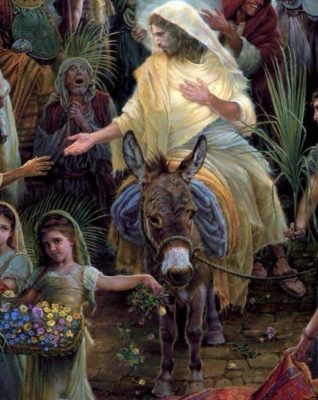 Vision: Jesus on a Donkey

Jesus was on a donkey with his hood up and a brown sash or tan type colors on his robe this time with white. Like he was in poor clothing for his time. All his colors are symbolism and have meanings. He was looking out at like a city area. This vision is a message of hope and an example of our beautiful King humbled! He arrived on a donkey with poor clothing as a symbol of peace and humbleness, bc Jesus could have easily showed them who he was and came with a mighty army and in his mighty armor. Everything Jesus did was an example for us. How we should be also like him in all things. He didn’t think highly of himself above others, but was humbled. It means our king is coming to us with salvation and he is just. He comes to bring hope! The prophecies and promises spoke about him was fulfilled. He was our humble King! How beautiful is he to display the kingdom and his authority like this instead of fame, fortune, or control. Wow, such a big heart he has!

Zechariah 9:9
9 Rejoice greatly, O daughter of Zion; shout, O daughter of Jerusalem: behold, thy King cometh unto thee: he is just, and having salvation; lowly, and riding upon an ass, and upon a colt the foal of an ass.
————————————————-
God showed me the words “Faith in” I know the focus word was faith, but it seems sometimes he wants me to finish the sentences bc he will add more words like an unfinished sentence. Too match this God has been teaching me something many don’t realize..it’s more then just having faith. Faith without works is dead. If the prophets did not also be obedient …would they have gotten to the promise land? It’s about learning to hear and obey also the voice of God.
James 2:18 But someone will say, “You have faith, and I have works.” Show me your faith without [a]your works, and I will show you my faith by [b]my works. 19 You believe that there is one God. You do well. Even the demons believe—and tremble! 20 But do you want to know, O foolish man, that faith without works is [c]dead? 21 Was not Abraham our father justified by works when he offered Isaac his son on the altar? 22 Do you see that faith was working together with his works, and by works faith was made [d]perfect? 23 And the Scripture was fulfilled which says, “Abraham believed God, and it was [e]accounted to him for righteousness.” And he was called the friend of God. 24 You see then that a man is justified by works, and not by faith only.
——————————————————————
Saw this vision of a girl and behind her popped up Jesus with his white robe, but this time he had his red sash on. I don’t remember what the lady looked like bc my eyes went directly to Jesus. It seems like she may have had short curly sandy blonde hair.

Dream: I dreamed of this minister and church. He was organizing a group of people to help serve the church. He asked me to clean everything and there were many buildings. I remember not being too happy about it, but I did it. I felt I had better things to do. I also thought who put him in charge lol.

Dream: I dreamed I was running in a field with other’s and it was dark/foggy. We were hiding from this marching group of men with guns coming our way. There was a mattress and I hide on the corner of it while others just waited in the open. I first hid by a guy also with a gun, but I didn’t trust him.

Dream: I remember going in a classroom with my old bff like high school again, and she had a popcorn and I had this chocolate I was hiding. The teacher was telling us we had too get caught up and there was a movie playing. the teacher looked past the treats we took in, even though I was hiding it.

Dream: I dreamed of a large wheel and it had an old sand timer on top and I saw two letters… “L” and another “l” was the letters before and after, but seems like an “r” was put in there also before the last letter.