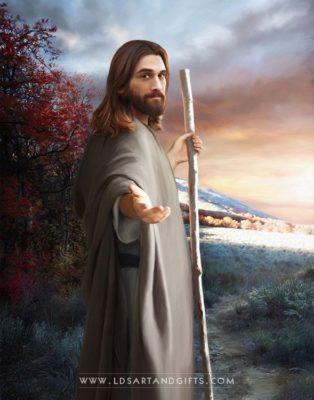 I saw a vision of Jesus and he had one arm around me looking at me smiling with his robe on and no hood up, and his other arm was reaching out like guiding me to something or a certain way. It was like he was saying “follow me” and this was confirmation of a video I just watched yesterday that this girl has his spirit so strong I heard Jesus speaking through her and that was the message. It was pretty powerful with his truth’s and a true message for all his followers on so many levels. I can’t tell you how much she answered some things I spoke to God about…She follows the holy spirits leading…see the link here:

I saw the word “Yes” about 6 or 7 times. My friend calls me that day to tell me the news that the girl he felt was from God said “Yes” to marrying him and he told me she said it more then once. I already knew and told them both (winks). Yay, I am so happy for him and it confirms God said it would happen in many of my past entries about my best friend Rodin. God showed a marriage certificate for him, I saw a vision of him dancing with her, and I saw his name on a reception table. We have been divinely put together as friends by God and God has revealed so much to each of us over the past two years. He waited on God for his wife and God now will be in his marriage for his faithfulness. Everything he was looking for or worried about God fulfilled in her. She also has visions and hears God speaking. They both have been tried and tested so much and now it’s their season of joy. I am soooo happy for both of them and glad I got to be a part of it all.

Vision: I had another vision of Jesus standing sideways and he had some round in from of him on the ground, like a white rock looking thing.
Vision: I saw a black card on a table and it said “Have the goal? Goal? This was in gold letters.
Vision: I kept seeing two or three visions of rain falling and some on a window and people all around. The next day I buried my grandpa it was very cold and rainy and I watched the rain fall on the window while we drove. I will miss him. I found out my grandpa gave the shoes off his feet, his last cigars and some of the little food and drinks they had to a homeless man. He also helped to save lives and these are not the first stories I heard of his generosity. I come from a long line of people who have huge hearts and they all loved the Lord. I have a huge family and not one does not believe in Jesus. My grandpa and grandma was a huge part of this. I am very thankful for their love and generosity.

Dream: I dreamed I had to go to the dentist to get a new tooth put in, but they said if I want a cheaper way…they now have holographic teeth.
Dream: I dreamed of a man who had a business growing garden food and it was like a plant business. He had a wife and two daughters (possibly twins). Two men were trying to take his money and one succeeded. He made him write a check for all he had to that guy. Before this the guy said his business was not able to pay the taxes for that year, so he was thinking of shutting it down. The wife stepped in and she grew cabbage and sold stuffed animals (beanie baby types) to help him. The cabbage seemed to grow faster then normal. The two daughters in the meantime had a plot to trap the guy who stole their dad’s money and somehow were able to trap him for blackmailing their dad. This guy decided he wanted to move to better land to help grow, but the wife wanted to stay in their location.
Dream: I dreamed I was looking at wedding dresses (bohemian style short laced dress) but wasn’t sure if the guy I was planning on marrying was the one or I had doubts. The girl kept bringing down the price and was gonna give it to me (they normally only rented them out) to make me buy it faster. She was gonna sell it for $600 because she said I was such a beautiful bride. I normally would not choose a wedding dress like this, so I was undecided.
Dream: Sisters son was hatching baby pigs in eggs, and then letting them go and not taking care of them. I tried to tell both his mom and dad and they both looked at me strange, but then my sister agreed he should take responsibility.
Dream: Me and my sisters were going on an adventure with elevators and conveyer belts that looked like a water slide. Somehow tho they left me and I was all alone and this guy shows up and grabs my hand to walk with me. Not sure who he was, but I protected him from some flying thing coming at him by warning him to duck. He offered me a ring and at first I was like wow, bc it was a very expensive ring to marry him, but for some reason he turned that back in and bought a cheap ring for $40 dolloars. He told me it was just as good, though I didn’t see it yet. I seemed to be confused if he was the one too and was sad I remember.
Vision: For some reason I had another vision of my aunt’s pill bottle with actual ants in it that were dead. I saw dead plants and a paper with instructions for like medicine. It was poison. Aunt poison. I think I understand this vision that her pills were poisoning her body. We often think med’s help us, but too much and too often can hurt us. The holy spirit can lead us to health with natural things, but we have to learn to hear.
Dream: I saw a black puppy at the bottom of a pool drowning and everyone else was just standing around ignoring it, so i jumped in to save him.