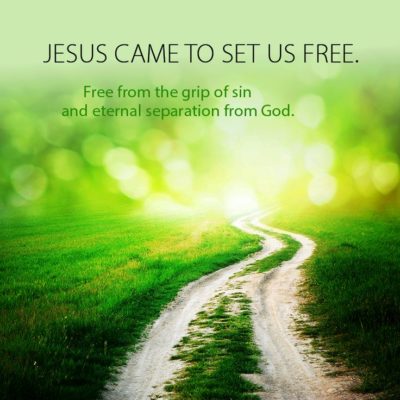 I saw a vision of the word “Loose” in white cursive letters. It was popping up from behind something, but not sure what that was. I think this word goes with what I heard a few days ago and that was a cage door closing. If this word is for you, God wants to set you free. That is the meaning behind loose – to set free from something. Either an addiction to someone or something, or from a situation. Jesus has proven he loves to set us free from things we can’t. There are many scriptures proving Jesus wants to set us free from things if we ask. You will be amazed if you ask him to do it, that the feelings or past thoughts will soon just be gone. His word does not go void! God is good, and he does good things for us when we make mistakes or get into trouble, he fixes it. He set the 3 men free in the burning fire (Daniel 3:25 below), which can also mean he set them free from the pain or fears bc they trusted him to do so. Trust with God goes a long way.  He also gives us authority over sin or bondage. We also can fast to be set free of things or for help and setting free starts in the spiritual realm as in Matthew 18:18 below.  All of it comes down too, we are free because of what Jesus did on the cross to make us free from sin and bondage.  So it’s there for you whenever or however you need it. The key for any help to resist sin is to cling to the Lord.
Isaiah 58:6 Is not this the fast that I have chosen? to loose the bands of wickedness, to undo the heavy burdens, and to let the oppressed go free, and that ye break every yoke?
Daniel 3:25 He answered and said, Lo, I see four men loose, walking in the midst of the fire, and they have no hurt; and the form of the fourth is like the Son of God.

There are 62 verses about being set free (loose) in scriptures: https://sarata.com/bible/verses/about/loose.html
———————————————————–
Visions of Jesus: I saw a few visions since I last wrote. A couple was the outline of Jesus face and darkness around the center where I could not see him fully. One he was facing me and the other he was sideways. I saw another vision of Jesus looking out through some kind of rock cave we were in. I saw the back of him and he was crossing his arms. I had another vision of him doing something with his hands, but I did not write it down and now can’t remember exactly what he did.

Dreams: I was dreaming of the counterfeit even more and my dreams became like his. We were still talking and God was confirming even more I believe he is the counterfeit. My dreams revealed at one time he was running from authority twice and he confirmed it to be true. I also saw a crime scene with a white plastic bag in his living room and this may be a future warning for something. Then I took his daughter to hide under the stairs and I did not know he had stairs, but he also confirmed that. The second thing that was confirmed was the name he gave me of Terri S. and though it was not spelled exactly right, it was very similar to his ex’s name with the sound of it as Tara S. I really think this is more confirmation for me to know I was right in feeling he was the one. The guy on the cliff looking like he was running from authority also I felt was him. God showed me so much before I met this guy, and even now has confirmed it.

My dream of my grandpa passing two post ago came true also. He just passed away yesterday. I dreamed a couple post ago that my mom was moving stuff out of his place, but I realized it was not his place I saw. We were actually moving stuff out of my mom’s work the day they said to come to the hospital he is not gonna make it. My dreams are bunched together for that specific time or event. My grandpa was suffering for a long time, and now he suffers no more. He ran his race. My mom was singing to him and they said he had a smile on his face before he took his last breath. My grandpa told me a week and a half ago that he always talks to Jesus. Maybe he saw Jesus.