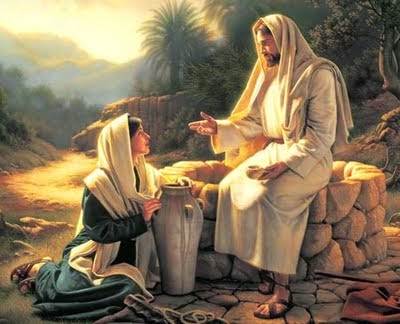 Vision: I saw Jesus at the water well where he picked up the water bucket with water and held it out towards me…smiling at me. The crazy thing is I was watching the story of Ruth earlier that day and I saw this same scene with Ruth in the movie, but an angel came to her in it. I felt so weary and hopeless just like her, when I was watching it. Jesus took notice! Smiles big at Jesus. He gives us water to drink from his well and it is overflowing like the previous vision I had of the tall water walls. The water he was speaking about was his spirit coming inside us, he was speaking of receiving his spirit (see below John 7:37-39). His spirit reveals Jesus on a whole new level, teaches, and helps us with all things. Ask him for this spirit if you do not see evidence of him manifested in you(John 14:21). Ask, Seek, Knock he said for it. Keep knocking till you receive.

John 7:38 “He who believes in Me, as the Scripture said, ‘From his innermost being will flow rivers of living water.'”

John 7:37-39 Now on the last day, the great day of the feast, Jesus stood and cried out, saying, “If anyone is thirsty, let him come to Me and drink. “He who believes in Me, as the Scripture said, ‘From his innermost being will flow rivers of living water.'” But this He spoke of the Spirit, whom those who believed in Him were to receive; for the Spirit was not yet given, because Jesus was not yet glorified.

God talks a lot ab his living water: https://bible.knowing-jesus.com/topics/Living-Water
——————————————
Heard Jesus saying something about when it’s time and receiving. I can honestly say I don’t remember his exact words, but I knew what he was saying when he said it to my spirit. Like when he speaks it, it will be fast. Like the words he has been saying to me lately…”Suddenly”…things seem slow to us at first…the wait is long with prepping, but once he speaks it…You can’t stop it and it will happen suddenly God say’s. It happens with his voice! I saw an example of this when i spoke with my new friend who has been a blessing to me. She hears Jesus speak also and has visions too like me. I am so thankful to have someone who understands me with similar experiences. She told me of her mother being converted by God. She was a hateful person for years towards her, then all of a sudden on her death bed God worked on her and my friend heard God say give her a message, after she delivered the message to her mom…she started crying and understood the message was from God. His one message fully converted her mother in one day. She changed after this. It just takes one word from God. So powerful!

Vision: Another vision I forgot to add last post. I saw a guy playing pool and he had the pool stick getting ready to shoot and Jesus was standing next to him like helping him get a good shot. Maybe more of a spiritual symbolic meaning for the guy playing pool.

Dream I was working on something and a guy walked in and I knew he was freinds/related to Travis in some way. It seemed like he was a famous type guy in some way. I asked him if Travis was ok, and he said yes he is ok. He knew I was sad about it with the way he responded. God was revealing to me Travis is still alive I believe and he is ok. I think I prayed for him so much, I struggle to fully be settled in my heart about him leaving so soon. He was a good example of a strong man to me and I could relate to his sufferings. It must have been God’s will for him to come into my life shortly to remind me what a Godly man looks like, bc I sometimes get off track and get attracted to the men I was used too for years. God is retraining my thoughts to see how his type of men will behave and act. Godly men I learned will keep a woman of God on track to do what’s right in God’s eyes. This was new to me on a spiritual level. He has been prepping me so much for this guy coming and I def desire a Godly man fully on a strong spiritual level. He has to be able to keep up with me & keep me on track ;p

The same day I wrote ab the counterfeit I got a couple messages I know were from the Lord for encourgagement..”What belongs to you shall come to you” I also keep seeing things like he will be delivered to your door that I also feel are from God. Finally, God has been repeating “Pure”…he wants us pure in mind and spirit so he can reside in us bc he is pure. The colors white he keeps showing me in all of the words he gives and the visions are revealing his purity.