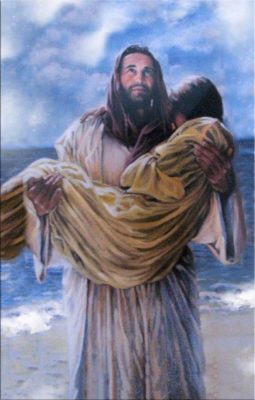 I had a vision of 4 wood blocks in one column and on the 3rd block it said “Restoration” and there is some significance to this. The day before this 3 black and white border collies show up and my family put them in the backyard. Two were young and one was the dad. They were hungry and really skinny so we took care of them, but I laid down that night so upset because I was worried about taking care of 5 animals with chaos and paying for them and was going through my past struggles with animals they keep bringing in for me to care for. This made Lilly go crazy and she would not stop barking at them at the window and I had to walk her outside and they would hover over her and made her mad more. It was a battle AGAIN with dogs. I got upset and barely slept that night asking God why this again. I guess God heard me, because the very next morning they got out and ran away, but then a lot of other chaos happened that I don’t understand. So, this must have been why Jesus was carrying me and I was laying on the ground the post before. I literally felt like that and God did restore everything the same day I saw this vision, though I still don’t understand it all. I started to feel joy again a bit before this, but not so much now after this. As soon as I have a bit of happiness, it is taken from me. It’s getting harder to believe I will have any happiness here again.
Words: Saw the word “Geo” on an almond milk carton and I knew exactly why I saw this when I woke. I checked later and it was true. This was a prediction 3 hours before this person did this. The vision was at 2:34 and it happened at 5:28. Not sure why I am seeing things about this person still though.
Words I have seen 4 days in a row: Next Generation or NextGen and I know why God keeps reminding me of this. The marriage he puts together will be a kingdom marriage put together by him for the next generation. I don’t know if my suffering up to this point has to do with this or not, but sometimes I feel it is fixing past generational mistakes for the future generation. When the strong man is revealed, will it all go away? I also know prophetic people are constantly being humbled or have suffering to keep them on track, but surely it is only for a season.

For anyone that is suffering: