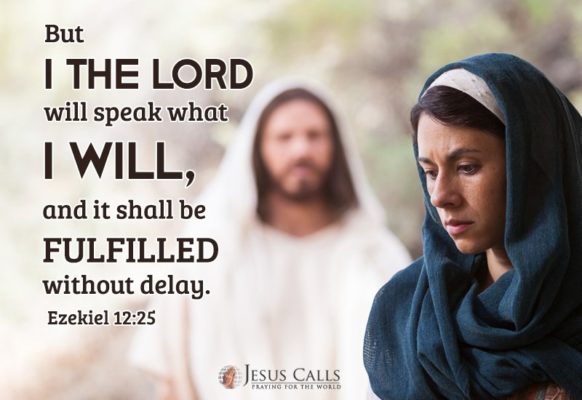 For I am the LORD: I will speak, and the word that I shall speak shall come to pass; it shall be no more prolonged: for in your days, O rebellious house, will I say the word, and will perform it, saith the Lord GOD. Ezekiel 12:25

I heard God say, “I will come through” and then he said, ” I will let you know” and this was pertaining to knowing who the strong man is. I told God I wasn’t sure which visions are of him 100%, because I get so many different people. I am having more visions, but I have a lot of visions of people and some of these are people I will meet online or in person or that just come in contact with my blog at the time God needs them too. It’s all about God’s timing and we don’t always understand what he is doing. That’s part of surrendering it all to him. I felt God showed me why I see different people possibly, as I found out today these could be visions for my calling and that has to do with marriage. I have been anointed by God and I know one of my gifting area’s is also in the area of a kingdom marriage. Again, I will give more on this as God reveals exactly what he wants. God sent me yet another supernatural marriage video and that is kinda how I figured out my calling as this girl is right on que with me. Her visions and teachings are similar to mine and what the Lord shows me and even the way she thinks. She even talks about layers of visions and God was showing me this also. It’s crazy how so many prophetic people that hear the Lord are like minded and see/hear into the spirit world similarly. Another pattern of God, because it’s him speaking to each of us. So, after watching this girl I felt God speaking to my spirit about my calling. I know God has been calling me to make video’s also at some point as most of the world runs on a fast paced schedule and doesn’t have time to read or the patience with the overload the world gives. He’s been drilling it in me that I will have too. But whoa…gotta be honest a bit scared about this change that is coming. Not just this change, but the strong man is on his way I believe from several prophetic confirmations and words God is saying. Just don’t know what God means exactly by “close.” He could be close as in 2 years or close as in 2 months. I have been given a month of “October” though. I am content however in waiting now and focusing more on my ministry & preparation as the Lord has asked me to do. Not even looking at men anymore, unless God say’s look up. I do know God uses some of our relationships to grow us before our partner comes, so I can’t say never I guess. I am praying about all these things and not moving ahead of the shepherd anymore…learned my lesson with a lot of pain and that explains why he gave me the vision of him getting out of the car a long time ago and letting me drive. I drove crashed many times, and am giving Jesus back the wheel. Apparently, I am a bad spiritual driver lol. My marriage will be a prophetic marriage as I am prophetic. I have attached the video link below to her story of her prophetic marriage journey. She made me laugh a few times, she has a cute spirit. Great inspiration sent from above 🙂
——————————–
Vision: I saw a man with his hood up and he was looking down and he looked like he had brown eyes (possibly) and he had a dark goatee.
Vision: I saw a man kind of running into this building with a glass door and there were flowers and a sidewalk to it. On the door it said something like “Midlay” and a word under it all in white letters and this was a business of some kind. This guy also had dark hair and a lavender polo shirt with dark blue jeans. He looked about 30-early 40’s. I saw him yet again after this vision and he kinda froze in view for a sec. That was new.
Vision: Saw my friends screen name but with extra letters in it and then saw a bunch of numbers, positive and negative ones. I felt this was a message of increase as the numbers got longer Almost like he was gonna have some set backs but he would keep growing.