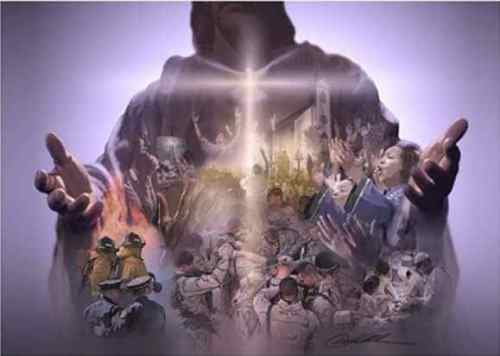 Vision: I saw a vision of Jesus writing in the clouds. It was like a cloud table and I could not see what he was writing, but this was in the midst of me going through some fleshly fighting against him. Jesus is writing our stories if we follow his will for our lives! What I thought was going to be another terrible birthday ended up turning out really wonderful, bc God’s hand was in it that day. My mom went into the hospital the night of my birthday and I spent the night in the hospital with my sisters, bc they were going to have surgery on her the next morning and we kept getting mixed signals from doctors. The next day however after I finally got sleep and woke, they were releasing my mom to come home to run further test. She is still needing surgery, but the day is too be determined, but hoping for a miracle in that. I got to spend my bday without my mom getting surgery, so thank you Jesus for that.
—————————————————————
Vision: A girl with flower watering can. She was walking over a separate patch of grass in the middle of the road that also had the same watering can sitting on it. This girl was in her twenties prob and dark skinned.
Vision: I was underwater and I look up and see drops of blood on top of the water all over, and I actually felt this was a good vision bc God was making me spotless again and cleansing me with his blood.
Heard and Saw Darre, then it showed again as Darren.
——————————————-
Strong Man Visions: I asked God the day before this if the strong man was even out there still and who was he. I woke with a vision of a guy with black hair and in a bun. He had a younger type face and seemed muscular but I couldn’t see his full body. He was staring out at something. I directly had another vision after that of him working in my mom’s yard and bending over doing something, but his face and some of his body was covered. I believe this could be him, but time and confirmation from God will reveal the truth of the visions. A lot of my earlier visions reveal a man like this also, but another man with short dark hair I have seen also. I’m not ruling out that it could be Travis still, because if it weren’t for the sickness we had a wonderful friendship and love for one another, but as of right now…would a strong man who God chose for me really just leave? I also, saw another vision the next day of a man going through papers and I only saw his hands and arms and chest area, but no head or anything else. I felt this was him also preparing paperwork for something, or possibly working. God sent this video that completely refocused me again on his promise. I was so down and out about my friend and forgot who was in control of my marriage to come. I was doing it in my own strength again and not trusting God’s timing or him to do his will for me. As soon as he reminded me of this, I felt peace in my heart again and love from him. He never left me, though I was saying to him “I am done God”, but he knows just what I need to pull me back to him and remind me he loves me despite my flaws. It’s very hard for me to give up my will with relationships, but I think I am finally finding peace and joy in yielding myself to his will and control for putting me with the perfect compliment of a man for me. The guy in the video said, he tried to be in relationships also and they all failed until he found the one God allowed. He sounds like me so much and it’s exactly what God knew I needed to turn around my focus again. I know without a doubt God has his hand on whoever is coming after all that keeps happening, and this video is prob one of my favorite supernatural marriage video’s God sent. This Guy is a great example of a Godly leader and strong man of God…