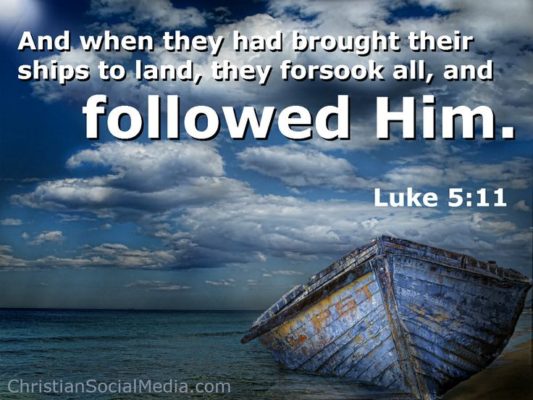 Vision: I saw a vision of Jesus and two boats side by side. Jesus was in the boat on the right and he was facing forward in his white robe. the other boat had a woman holding a baby and she was facing towards Jesus, but her boat was separated from him. We can fight and fight for something we want or need, but in the end we need to go by his word and his doing for the right timing for things. The miracle is with him and not apart from him. The closer we are to his boat or even in it (abiding in him) the more we get to see all he can do for us and others. We need to love him over all humans, bc they all belong to him in the end and his goal is to make us fisher’s of men. They forsook all and followed him to do the same work as he did. Being closer to him was contagious and rewarding compared to everyone else. Apart from him we can do nothing (John 15:5).
Jesus saw two boats but entered Peter’s own! – Luke 5:
And it came to pass, that, as the people pressed upon him to hear the word of God, he stood by the lake of Gennesaret,
2 And saw two ships standing by the lake: but the fishermen were gone out of them, and were washing their nets.
3 And he entered into one of the ships, which was Simon’s, and prayed him that he would thrust out a little from the land. And he sat down, and taught the people out of the ship.
4 Now when he had left speaking, he said unto Simon, Launch out into the deep, and let down your nets for a draught.
5 And Simon answering said unto him, Master, we have toiled all the night, and have taken nothing: nevertheless at thy word I will let down the net.
6 And when they had this done, they inclosed a great multitude of fishes: and their net brake.
7 And they beckoned unto their partners, which were in the other ship, that they should come and help them. And they came, and filled both the ships, so that they began to sink.
8 When Simon Peter saw it, he fell down at Jesus’ knees, saying, Depart from me; for I am a sinful man, O Lord.
9 For he was astonished, and all that were with him, at the draught of the fishes which they had taken:
10 And so was also James, and John, the sons of Zebedee, which were partners with Simon. And Jesus said unto Simon, Fear not; from henceforth thou shalt catch men.
11 And when they had brought their ships to land, they forsook all, and followed him.

———————————————————
Dream: I dreamed I saved a girl from drowning. There was cabins all around located on the water. Seemed to be a lot of ppl walking around in water.
Dream: My sister and me were like at walmart but also some weird building. She saw a black snaked and knew it was evil and ran from it. These men there were involved in voting for someone in some kind of office position and they were cheating the system somehow. Something to do with a shoe box and two girls votes not cast in…possibly maybe more even in the shoe box.
Vision: I saw a vision of fruit drinks, and the next day i was looking for fruit drink images for an ad was creating.
Vision: I saw a man with sandy blonde hair and he was young looking and his bangs were curled down a bit over his forehead with a small mustache…possibly gray or blue eyes. He was in the 20-30 age range with light freckles.
Heard: Whistle that woke me
Prayers for Travis:
Heard: Faintly heard: I’m just ready to go home…I think this was Travis voice, he is not doing so good and needs prayers. I think the thing I learned through all this healing stuff is that if God gives you peace about your time, then it’s time to go home. However, if you don’t have peace and want more time, then ask him for more time like Hezekiah did. If God feels your time will be good here longer, then he will grant it and heal you.
Visions: I also had two separate visions of potatoes and this could possibly have been something to help him from the holy spirit.