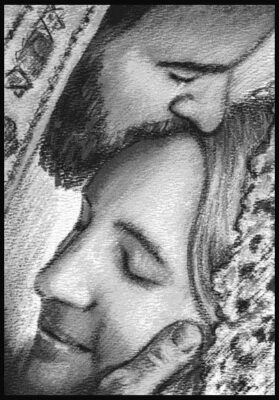 Vision: I saw Jesus kiss this man on his right cheek like greeting him with a holy kiss, but I saw the man walk away after this like God approving him to go do his assignment or task given also, so I believe this was a double message. This man had blonde hair with shaved sides and back. Top was longer and brushed to the side it looked like. My impression was he was approving this man’s task given to him and greeting him with a holy kiss. I believe his main message is we all should greet one another with unexpected love or kindness. The second message was for someone specific reading this post.
11Finally, brethren, farewell. Be perfect, be of good comfort, be of one mind, live in peace; and the God of love and peace shall be with you. 12Greet one another with an holy kiss. 13All the saints salute you. 2 Cor 13

Sharing: My sister and I were talking about where she wanted to move. I got a prophetic word of a specific location and she forgot ab it and so did I. Months later she is closing on a home in that location and I reminded her of that word. She was looking in several locations and was struggling to find something, but God knew the exact location she would end up.

Vision: Saw Jesus in robe and he keeps having this square thing around him or he is displayed in a square that looks like a stamp?
Vision: Saw Jesus face on stamp again. Was darker this time. These stamps could be a representation of moving or delivery or change.
Vision: I saw the number 58 after this.
Saw Prophetic Words- Change Is Coming
Saw: Mine ( He calls us his) Isaiah 43:1-2 But now thus saith the Lord that created thee, O Jacob, and he that formed thee, O Israel, Fear not: for I have redeemed thee, I have called thee by thy name; thou art mine.

Dream: I was dreaming of a kidnapping. The girl was kinda famous and she was dark skinned. The one who tried to kidnap her was smaller and a lesbian. She had another girl in the room already. She tried to take this girl back there and got trapped in the room, but somehow the door was not shut all the way and she got it open. She lived in a two story home with lots of rooms. It was like it was given to her by parents or family who passed. She did not have much family left. This home had an antique type red rug and parts of home, but kitchen was modern. It was an older home.

Dream: At one point I was sitting in this chair and one lady recognized me from a lie someone wrote ab in a magazine or media. She gave me a dirty look and told me she saw me in that magizine and walked away. I said what did it say? She would not answer, she just believed media over me.

I dreamed of a brother in Christ – he placed a daisy on my chest. He had Lots of ppl at his home and I saw one blonde girl, something about a lot of meat. Could not trust his full family. They were somewhat like my family as far as believers, but did not seek to go farther with the spirit. They were meat eaters (devouring ppl’s time that was fed the meat spiritually), A blonde very beautiful, not sure if she is his wife, sister or daughter, but she had very powerful spiritual gifts. Not sure if she was using them yet. He spoke with me about the meaning of the daisy and it felt like he was my brother bc we both talked about Jesus so much. For some reason he got occupied and busy and so I went to talk to his family and I tried to tell his family my testimonial but they were too busy and cut me off, then someone tried to play a game with me….a man who seemed nice but was also preoccupied mostly. I will link his video’s here:

Prophetic Word To Go With this dream below: “His eye is always on the sparrow, His eye is always on the sparrow…”
Africa Dream I felt was for a friend and I was God’s eyes in this dream: I dreamed of Africa and a group was going to visit. They were staying in a location that was either inside a shopping center or business of someone. So I think they had a home and business there. Some kind of shop near other shops. There was distrust there and ppl were always on edge as far as money. Something about a daughter who was sneaking out at night and she loved pizza. At one point I saw a baby that was like it was mine running towards a wolf and I told the baby no get back. ( I knew this was God saying he was protecting his children from the wolves because I got a prophetic word when waking from this dream I heard twice: His eye is always on the sparrow, His eye is always on the sparrow. I also saw myself getting in a bath to cleanse and I look over and many africans were kneeling bc of a funeral like someone died. Not sure if this was someone popular or important or they always grieved like this for everyone. They understood I did not know their culture well and accepted my differences, but I could sense they would not tolerate it long. My interpretation was that God was protecting them from something either while on this trip or from going on this trip. His eye is always on us and he is protecting us from danger we cannot see, but he can.

I got a prophetic word of names: Kevin, Margarate and then under I saw the name Ben. I took this as his parents or ppl who cared for him. I have met/or got one name of a parent of three Ben’s after this word within a one week time frame, so still figuring out who it was for or if it’s for this audience. I have ruled out one Ben, and one was a child’s parent who I cannot contact, and another I have to meet him again. Praying for these two boys I met at a bday party whose dad’s name is Ben.

Dream: I was dreaming of a new girl best friend but she felt like an angel too so idk bc many times these angels in my dreams feel like best friends I knew before, but she was helping me with living arrangements. She had amazing abilities or spiritual gifts from God. After this we were on some white horses and there was sooo many white horses riding next to us like a herd of horses going so fast. It was like we were guiding these horses to safety and they were there with us in this war. This girl was ahead of me and she had a great personality and strong faith I felt. It felt like we were fighting in some kind of spiritual war and another gold bullet was shot at me that I caught instead. These gold bullets I keep dreaming about are bigger then my fingers.

I may be adding more later, I had a lot this time because I haven’t written in a while so I need to double check all my locations I write things down in. I do have other things that came true, but I may share those in the next post.