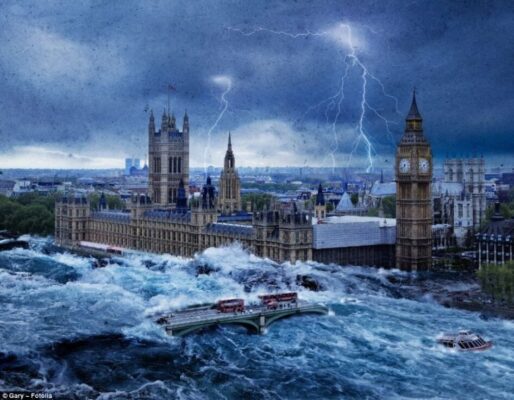 Three end of world Event Dreams: I have been having repetitive end of world dreams from God, so you can go back and read some of them if you like. Many I am playing the role of someone and seeing through their eyes. God is trying to warn us. Below is three more end of the world scenes God is pointing out.

Dreamed of the end of the world- It felt like I was playing the role of someone possibly this time. It was full of water and very little land spots left(repetitive dream). I was in deep dark blue water that was covering most of hte earth trying to swim to the nearest land spot with my mother. A very small amount of us was being perserved and going to these bunkers below ground that had water only ankle deep. We went on a helicopter I believe. We had rooms that looked like a hotel but were very small with one bathroom, and the hallways still had water to our ankles. We gathered on the other side that still had green grass and not filled with water and was on a hill. We were going to start our own community and our resources were going to last ab 6 months we figured. We started with making a store and each of us had very few items we had with us. We could not go above ground bc something in the sky was coming that was going to kill ppl. I was not sure what that was. Before this I saw the world full of water and things were chaotic and very few ppl were going to survive. This new community felt a bit controlled, but by good people with good intentions. This place was hidden, like a ditch area that had this half octogon top of concrete shape to enter into and ditch on bottom and gated or protected in some ways where others could not get in.

Second End of World Events: People are going to start loosing their jobs that had them for years and most jobs will be temporary jobs. It will be hard to find and keep jobs. To go with this I had a second dream a different night where three sisters were doing the same temp job bc it seemed hard to find full-time or permanant work. The middle sister made more money bc she went with a different temp service that paid more. All three were educated and could only get temp job.

3rd End of World Event: India was going through a crisis and was not prepared for a pandemic that is coming or end of world event. I saw a lioness was roaming between them scaring them ready to devour. There was people scrambling everywhere scared and trying to save food. Somehow they had no more food source or something was happening to their food supply.

Heard in the spirit: Disfunction

Vision: Saw God is here for you in writings and I kept seeing rows of writings from him that kept going horizontally so far.

Woke to hearing “BOOM” and it did not sound like God, and at first I thought it was satans voice, but then I watched a video that very day where a man and his crew was supernaturally transported and in the video he yelled “Boom” in faith that they would get to their destination faster. I am sharing this testimonial bc God allowed me to see that ahead of time I believe to share. https://youtu.be/DeQfjI1S930

Dream: I was standing in front of Joel Osteen’s church congregation and he gave me the mic for a sec and I said three times “Your missing the baptism of the Holy Spirit” He took the mic after this like he was confused. I believe I know the meaning of this dream to mean he is missing on some deeper lessons of preaching on the baptized in the Holy Spirit still.

Vision: I was pregnant again and at my last trimester, and this felt like God birthing something into my life spiritually again. Remember he always does it in the spirit first, before you see it in the natural.

Vision: I saw a beautiful sunrise appearing like heavenly colors of pinks and oranges and yellows….I instantly felt in my spirit something was rising up.

Vision: I saw myself opening many doors in the spirit.