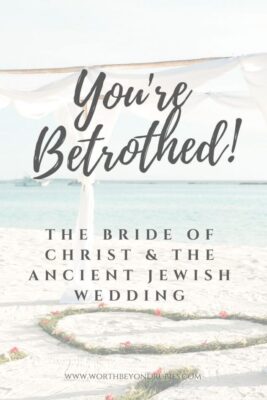 I heard this morning when I woke in the spirit “Betrothed” and he knows that one word that will calm my anxious or sad spirit back into feeling renewed in his love. This one word brought me back to the reality that we are already betrothed to Jesus, we are already his brides and he is coming for his brides. That means we are already his and he will never leave us and is already preparing a place for us. I read this beautiful article about being betrothed to Jesus and so much of what I read from his other brides or scriptures reminds me of visions he showed me to prove all this. These visions was before I knew I was a bride, or truly understood it. That’s why they are so powerful. In this article she talks about how in Jewish culture if your betrothed your already married. The husband goes off to prepare a house after this for his bride, but your already considered married. Then you have the feast after this point. So we are already married to Jesus if we are his and accepted the holy spirit. He told me when he first came “Do not forsake me” and that tells me I was his already. He showed me all these visions about being his bride and what that means. He showed me it’s not easy, because we are becoming one with him like she mentioned in this article. He’s reshaping renewing our mindsets and ways. He showed me so many times he is preparing a place or land for us. He recently said “The land – and it is the land Jehovah Jireh put together.” He also showed me the excitement he has for his bride. Jesus loves his bride so much he died for them. That is a true strong husband’s love. Men don’t run away from this just because of the way the world made the bride to look. If your his, then your his bride too, but it may look differently to you then us women. True brides of Jesus know it’s spiritual meanings and we surrender to our King no matter what gender. We are all spirit first and our flesh will pass away.

Vision: I saw a vision a few days before this of Jesus standing sideways again, staring out into the distance. He had his white robe on, but this time his red sash. He did not have his hood up this time, but his wavy long shoulder length brown hair. He covered our burdens, our sins and pain and suffering on the cross. He will be wearing red to fight in the end times for his people. Red is a symbol of his blood he shed for his people. Our sins, our struggles, our suffering, our bondage. It’s already been paid and won. It’s a beautiful message.
Vision: I saw Jesus walking like he was walking through some columns that were like an underground area. Almost like an underground subway, but not sure that is what it was. He was on the other side walking past a column with his back of his white robe showing. I love that he allows me to follow him in the spirit 🙂 He’s always working for us and wants us to be watchful for him.

God has been saying to me completed, refined, well done, things like I have passed something. Probably because I feel I am struggling more or like I am doing something wrong, but he is reassuring me. I want to reassure you that if you don’t feel good enough, he see’s what we will become before we can see it. He is not done with you yet and he won’t leave you ever.

Dream: God confirming our new bodies: This dream I am excited to share also because it matches all these dreams about me fighting in the end times or resurrection in scriptures. I had a super human body this time. I was being shot at by these very big gold bullets, but way bigger then a normal size bullet. Not sure what that is called. I was able to catch all these bullets and the people were amazed. My body did not feel normal, but def was taller also then the people around me. I remember thinking we are going to get new bodies and this def felt like a new more powerful body. To show you further this I found a very deep lesson that some of you will understand and some may not be ready yet, but I pray your eyes and ears are open to his truth: Deep calls unto deep… https://youtu.be/fE81HrKxHoo

Philippians 3:21
21 Who shall change our vile body, that it may be fashioned like unto his glorious body, according to the working whereby he is able even to subdue all things unto himself.

Dream: I dreamed I was helping a boy learn to take care of God’s fish. It was a very big golden type fish and he was slowly making it suffer by taking it out of the water and holding it in a blanket, then he would splash it’s face with water, but I taught him how to care for it by keeping it in the water. He was an elementary boy.
Dream: I believe I was a mother in this dream to a toddler son who needed surgery. There was something about the way the doctors were testing him that I did not agree with. Something about plastic bottles and swallowing. I did not agree with the doctors.
Dream: I believe I was the man buying the home in this dream. I was buying a house and I was pulling rope out of my truck in the driveway of the home before I was going to view it. An older lady cop thought I was suspicious and asked what I was doing, but I let her know I was just looking to buy the home. She didn’t trust me, but I was innocent. it was like the rope got stuck around the steering wheel. She took me inside to show it and it had things left over from the woman who died that owned it. I asked the cop if these things were part of me buying this home.