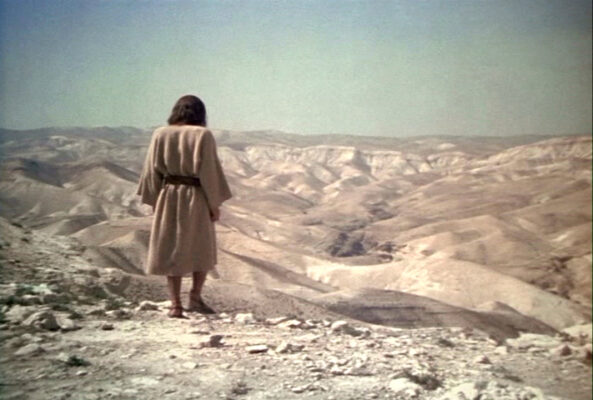 To the ones following him in the wilderness…God has a message….

I saw a vision of Jesus and he said: “Focus on me” and then he paused and said “Better”
He looked like he was in a wilderness, with me trying to find him again. I keep seeing a pattern of this in my visions, they look like I am following him through empty places of just plants like a desert. He has been reminding me there is confusion in the wilderness, there is pain in the wilderness, there is suffering in the wilderness….Satan is there to tempt you….Keep Focus on Him to survive. He said “better” because he speaks things into existence before we even see it and he was saying this bc he saw me refocusing back to him before I could. I knew exactly what he meant when he said it. He spoke faith into me. Satan does a number on some of us to distract our focus, but once you put your focus back on Jesus… it will be “better” Jesus said. Especially in the wilderness you need to focus on Jesus.

I was also tested/spiritually attacked with another vision prior to this, where I saw Jesus washing his hands on a match box, but just saw his hands. I starting thinking he was saying he is washing his hands of me and panicked, but then I remembered we are tested and to test the spirits and remembered the scripture….I will never leave you nor forsake you. I went to bed really upset and confused….but Then Jesus showed up in the vision above and gave me peace. Yet, another vision I saw a lamb that looked like it was alone in an empty place. There was a wagon by it. There is some significance to this also, because I watched a movie of a woman that suffered from loss of her husband, a baby and everything. They travelled miles in a wagon, but in the end the wheat grew and she survived. Remember if he is inside us, he see’s and hears what we do. He will relate to these if they were a message especially. This movie was a wilderness experience—God’s lesson. She lost her baby, her husband, her home, her money and her wheat caught on fire, but in the end it was restored and she got a new husband. That’s not a coincidence I had that vision. It was confirmation!

We stumble away, he pulls us back if our true desire is his will and to follow him. The wilderness is no joke and can humble even the strongest of men or women. If we finally get to that place of being approved and ready by not giving up on him, then we get to the promised land and there you will see God’s hand move in a way that brings great joy. The devil will loose his hold. Another reason the devil fights you so much right before your promises.

Everything I write has been devoted to showing others how God speaks and works with his children and especially those in the wilderness. The first time I encountered Jesus voice I was in shock he could speak so clearly, so loud. I was going through such a hard time in my life loosing almost everything. You can read all my story/encounters through that phase in my earlier entries. I thought surely things will get better now that I have this close relationship with Jesus, but it did not— it gradually got worse no matter how positive I tried to be. I know greatly what silent suffering really is. I heard another prophetic girl say in her wilderness she felt the same as I do, like the only thing she has ever known was suffering right before God brought her promises. I’m still in my wilderness for reasons God only knows and it’s called long-suffering also in the bible or it’s called being refined by fire. If your suffering a-lot for a very long time, you may part of the third part Jesus spoke about. Zechariah 13:9 “And I will bring the third part through the fire, and will refine them as silver is refined, and will try them as gold is tried: they shall call on my name, and I will hear them: I will say, It is my people: and they shall say, The LORD is my God.”

Long-suffering is a fruit of the spirit and proof you are God’s. We all will have a wilderness experience if we are God’s at some point. There is so much evidence in the bible of that as well as the walk Jesus our example laid out for us. Just pay attention to the patterns of the one’s who had a suffering experience for following Jesus. The patterns are evidence! I don’t want to say any of this to scare you, but to prepare you for truth. The wilderness will reveal things about ourselves too and then show us how much we need God and how much he loves us. This experience will open your eyes to so much and also supernatural things happen in the wilderness(like the manna for the Israelites) as well as he reminds us there is a promise at the end. We each have specific promises God is ready to speak into our spirit, but we have to really incline our ears to hear and see. We have to want his will over our own. ooooh Do you realize how many people I have heard say they heard Jesus at their darkest hours? I ask everyone I meet if they have heard Jesus yet….This is not a coincidence so many say they have heard his small voice in a dark hour. You find him in the darkness bc he is the light. Exodus 20:21 And the people stood afar off, and Moses drew near unto the thick darkness where God was. Light shines greater in darkness.<—-You see that pattern?

My suffering feels like birth pains at times. I don’t want to speak to anyone or get out of bed and then bam 3 more things happen too, but the Lord gets me up and sometimes with a word of encouragement or vision. I do feel I am getting stronger in many areas that would have bothered me in the past. When we go through the wilderness with him, we are following a very strong King who wants to make his people strong spiritually. He wants to guide with love, not with a bit and bridle like he mentions in Psalms 32:9. He wants to guide with an easy yoke, but we fight him or go back into our old patterns and the closer you get to him if you even try to go back not intentionally your spirit will feel it. Sometimes it’s just about getting us to surrender specific sins or thought patterns etc…It’s a process that takes time! The holy spirit will guide/correct us.

God has grace in the wilderness. He knows we are suffering. There is so much grace in the wilderness I now realized. I have not been perfect, nor even nice to God at my worst times, but I always feel bad bc I know his true intentions. I don’t handle constant pain very well, but God see’s my devotion despite and my love for him deep in my heart. I could write so many books with all the things God downloaded into me(Visions I had in the past). The phases of the wilderness, Kingdom Marriages, The visions of Jesus and his personality, How to follow the King….but one book he mentioned years ago was “How to Surrender to the King.” This wisdom can only come from the King. Please don’t ever mistake any of my writings as me bragging or being boastful in any way. I have been humbled and it’s not my heart. First, I am earning my stripes to gain his wisdom/truth and second I know where it all comes from, so it’s not mine to boast about. I boast about one thing, that it call comes from King Jesus. I’ve notice every time I suffer the most, God has a bigger more powerful message for his people, so the devil wanted it stopped. You become humbled in the wilderness, you grow more understanding of God’s ways in the wilderness, and you earn your stripes by following him. It’s not by our works, but by his works and faith without works is dead.  So while God is the one orchestrating behind the scenes,  we still have to do our part and get up daily, pick up our cross and follow him.  We have a choice and that choice has a reward! God wants to share his glory for those who sacrifice, surrender and are devoted to his will.

In the wilderness you also start to loose interest in sins or things that kept you held captive. Everything becomes meaningless in the wilderness. You become like the King, because he is inside you making room and cleaning house so he showed me in another vision before! Jesus said….”Focus on him” so he can lead you out at the right timing. He wants to help you get to the promise land! Trust him!

I cried out to God and not only did he speak to me and show visions…. I woke to see on my phone…”I HAVE SEEN” and I instantly knew in my spirit that was from the Lord. I want to keep speaking words of faith like Jesus, despite how I feel or what I see. I keep seeing, “It’s Time” since he last spoke it, but he has not clarified what that is for yet so I wait on the Lord to confirm for me personally. For some of you this word is for your promise now. For some of you, you know it’s your time to shine for the Lord or walk in your promises and calling. God will confirm this if so. Finally, to add to this I saw a vision of the white word “Promotion.” Pray if this word is for you…God always confirms. I pray that each of you have encounters with Jesus and that you will know and seek his real truth from him personally. Blessings and Love Always!