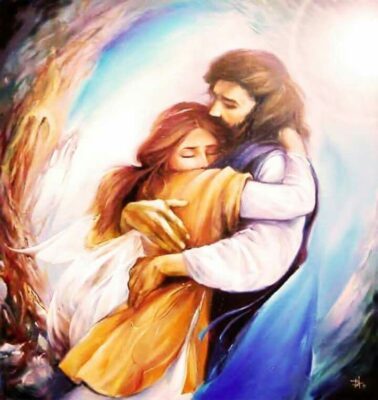 Vision: I saw a vision of Jesus the other day standing and facing me smiling. It was his left view with his hair down and a sash over his white robe. I believe the color was blue, but my focus was on him more. I saw him grab me with one hand and then the other to pull me in for a hug. I love that our God loves to hug us, and loves closeness with us if we need it. He knows our love language and relates to our needs. A God that hugs his own people? Think about that…

Vision: I woke this morning to the Lord giving me visions and words after praying. You have to remember God is addressing things I am asking sometimes also… I specifically asked God if he has a message for his people. I saw a vision of a stone tablet that had three things on it. In order I saw on the tablet:
1. “Near” (he likes to tell/show us he is near us)
2. I saw a vision of praying hands in a square shape. (He tells us to pray)
3. I saw three messages each with plus signs between them. I felt it was God + Jesus + Holy Spirit (he confirmed the message below)

I knew instantly he meant that God is one voice for all three (God Jesus and Holy spirit). The primary message was that he addressed where the voice was coming from. There is only one God and he was manifest in flesh. The word was God and there is no other Gods next to him. John 1- In the beginning was the Word, and the Word was with God, and the Word was God.
John 1 10-11:
10 He was in the world, and the world was made by him, and the world knew him not.
11 He came unto his own, and his own received him not.

John 14:9 9 Jesus saith unto him, Have I been so long time with you, and yet hast thou not known me, Philip? he that hath seen me hath seen the Father; and how sayest thou then, Show us the Father?

After these messages I had three dreams where I was playing the role again of someone else and trying to help:
Dream 1 -One dream was about a family who had a two-story house and the man and woman were poor. Their stairs was breaking and they had many kids, so I helped them to realize they should relocate the stairs to inside the house and make more bedrooms in the bottom of the house. They were struggling with directions, so I helped them. I believe I was a friend to them. Really it was God in me helping them.
Dream 2 -The second dream was about a son who this family was in desperation for him getting work to help out. They were meeting a guy in a truck and the son was going to go work with this guy, but I was the daughter and having prophetic dreams and I remembered in one the very scene of this truck and that he was going to kidnap the son. I was trying to tell everyone, but no one believed me and it was too late. The man took the son. Everyone was in desperation trying to find him. It was sad, but lesson learned God will warn in dreams also. I remember also flying on this octagon disc shaped object that was dark gray. I was able to fly really fast to the scene. Could this be an invention for the future. Somehow my feet stayed on it, possibly magnets connected in my shoes, but this thing could fly. It didn’t go up too high, but was off the ground and was very fast.
Dream 3 – I was with a group of 3 and we were driving in this car to go do a show at a basketball game. It felt like high school. We had a convertible car and it felt red. We were going up this bridge and somehow all fell asleep in the car. The car was still going and we all woke just in time to see the bridge was opening up and our car was going down into the water. We woke all at the same time just in time to be saved. We were hanging from the sides. I remember I was a short man with a fun personality and going around telling everyone “Who do you think woke us all up right before that moment?” God did it!

Vision: I saw a vision of Jesus face like he was inside me again and so close.

Woke one morning to hearing in the spirit: To whom much is given, much is required…Then I knew God was saying he needs to trust us too.
Vision: I then saw two people wrestling and I knew instantly this was God saying I am wrestling with him again.

Vision: I saw two different days of visions of the word “It’s Time” and “Time” The first I saw in big white words “It’s Time” and then another day I saw big white words “Time” on a patterned cloth. These words have been repeated since I seen them as confirmation something is happening in the spirit realm. I also woke feeling something “BIG” in the spirit and it literally woke me like a boom or shake. I have no clue what this was, but I knew it was something big and powerful happening. I have felt similar before, almost like God did something big and something was released into the world to help possibly. Whatever God did, I was happy after I felt this because I knew it was good. Prior to this I heard 6 days from July 10, so this was on July 16th and also the same day I got so many messages from God. Not sure if they relate.

Vision: I saw the words joy and then encouragement in white words.
Felt: I felt something leave my body that was a burden on me. I felt this in the spirit. I felt lighter after it left me.

Some of these could be for others…Please take these to prayer if you feel any are for you…
Dreams: I have had so many consistent dreams of taking care of a baby boy that was wild or mischievous, but this last dream I was starting to get him under control more. I had him strapped in a toddler stroller and he did not like putting on shoes. His shoes were white tennis shoes.
Dreams: I have also had consistent dreams of a man that I don’t trust, but he keeps coming in the scene.
Dream: I dreamed I had a daughter and she was at a neighbors house or close and I didn’t know. I’ve seen a similar dream in the past. Could a neighbor have kidnapped your daughter?
Dream: I had a blonde girl neighbor come to judge me and a group of people and I told her to judge not thy neighbor lest you be judged. It was some kind of neighborhood get together.
Dream: Stayed in hotel and a guy who just did a drug bust, wanted to give me and my family 6599 dollars for us to split. He made that money from busting people who did drugs. I believe this guy was possibly a cop or higher up and he wanted to impress, but he was also geniune in his giving. I respected this guy for doing good in the world. He felt like a powerful leader of some kind. My family was on vacation. He was somehow near that location.