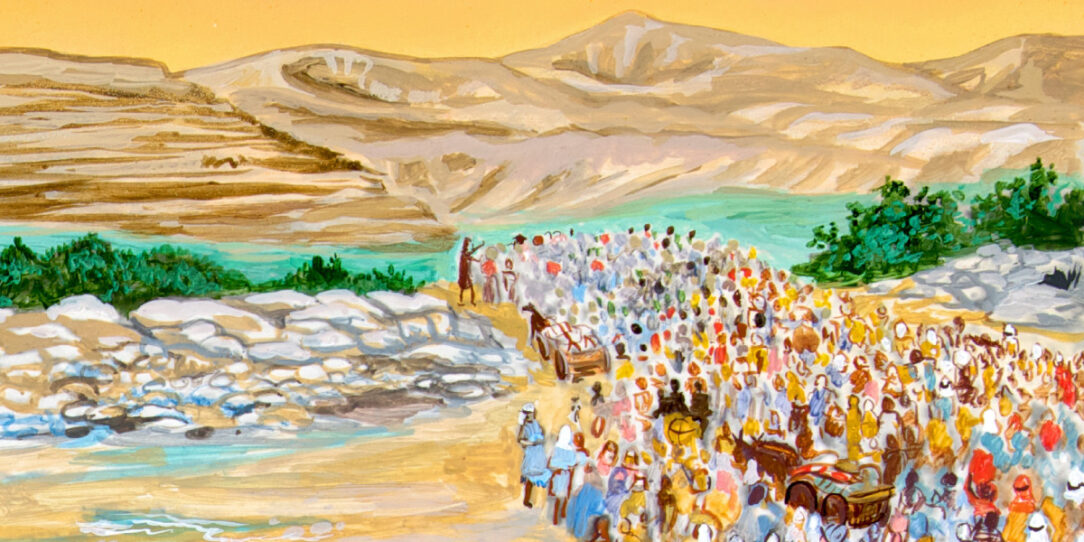 Heard Jesus say: “We must cross the river Jordan.” This goes with my last two messages and the vision I had below of “Time” God has been repeating this the last few post about “It’s Time and invitation to an open path.” Jesus is helping many of us cross over the Jordan to your promised land. There are so many deep meanings to this, but for some it’s getting the promise and seeing God move in your life with it. Those who stood by the Lord through it all. Those who God made a promise. Many of you it’s time to cross over bc you still believed the Lord despite feeling discouraged lonely confused or rejected. We don’t belong here, so it won’t treat us the same as God does. It won’t be like nothing he has planned for us, he calls it paradise. That paradise or promised land is with him included. Remember, things happen in the spirit realm before they manifest here, so it’s all in his perfect timing, but if he say’s it he will do it….he will! He has been saying “Are You Ready.” For some this means driving out the oppression and seeing God move more in your life now Joshua 3:10, he will be giving new land, or new marriage, and new hope. Read all of Joshua 3 about the story of all involved of the Israelites with crossing over the Jordan. Keep in mind everything they had to go through and do to possess the promise land after they crossed the Jordan.

Joshua 3:5 And Joshua said unto the people, Sanctify yourselves: for to morrow the Lord will do wonders among you.
How do we sanctify: John 17:17 Sanctify them through thy truth: thy word is truth.

Vision: I saw the word “Time” again and this time it was in big bubbly font and had a paradise or beach scene inside of the letters. This word has been repeated to me 3 times now. See the past two post for more about this word. I also saw a sentence with the word “Ready” The paradise I understood to go with crossing over into the promised land.

Vision: I had another vision of Jesus. I saw him standing sideways facing right on my left view. He had his hair down to his shoulders and a very pure white robe on. It looked thin and more pure then normal. His sleeves were very long almost to the ground. He had his palms facing upward and his head was bowing and praying. Most don’t realize he prays for his people and it’s very powerful when you think about the King praying for us. Read John 17…Jesus is praying for his chosen people as well as those who hear the words he spoke to them. Pay attention to this whole chapter, Jesus gives a lot of nuggets. He is not praying for the world below, but for those given to him. The world is not his. Only those who seek to do the fathers will are his.

Matthew 12:50 For whosoever shall do the will of my Father which is in heaven, the same is my brother, and sister, and mother.
John 17:9 I pray for them: I pray not for the world, but for them which thou hast given me; for they are thine.
John 15 I pray not that thou shouldest take them out of the world, but that thou shouldest keep them from the evil. 16 They are not of the world, even as I am not of the world.
John 20 Neither pray I for these alone, but for them also which shall believe on me through their word;
Romans 8:34 – Who is he that condemneth? It is Christ that died, yea rather, that is risen again, who is even at the right hand of God, who also maketh intercession for us.

Vision: blood being poured in a file cabinet. He covers even our secret filed away sins with his blood.
Dream: Another dream of a man helping my mom. There was something to do with her tv and me helping fix it, she was getting updated things in her home.
Dream: My friend also was getting an increase and his apartment had nicer things. This apartment was a lot of stories up. I was there helping him clean it up and I remember closing his curtains bc I could not trust his neighbors. I had a very white dress on. There was a couple nearby where I heard a little boy crying and they came and told me they needed to get him back to his parents but needed someone who could speak africans and english and I told them my friend could. I asked if it was a safe trip and they said yes. There were three men he needed to speak too, but I suggested them coming to his area instead of him going outside of his area to a less safe place. They agreed. At the end of this dream my friend gave me money to help and I felt it was too much. This dream went into another dream where I was now in another high apartment complex where they were living there and most did not go out much bc it was bad around them outside. They were spanish and had a dance floor inside this building.