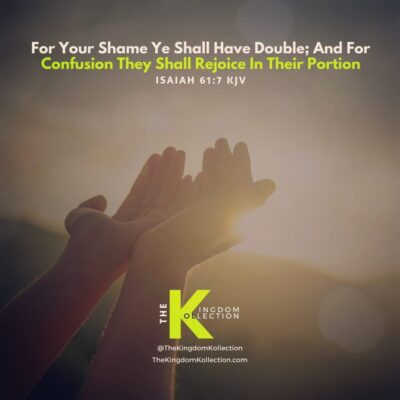 I asked God to confirm this word and he did 3 times. There are two meanings to double portions, same as with many things of the bible. A worldly portion or a spiritual portion. For some of you God is saying it’s your time to be raised up out of the pit and some you will get double portion spiritually as did Elisha in 2 Kings 2:9. We often think only on the worldly gifts and not on kingdom gifts, but God is clear he gives both.

The ones who went through long-term suffering and stood by Christ, loved others and kept your faith as strong as you could…he is going to give you back double portions for all the devil stole from you. Some of you have went through the fire and like Job or Joseph it’s time to restore. God will confirm to whoever this word was for. Keep your eyes and ears on him speaking/confirming and don’t forget to show thankfulness and praise for all he has done for you. I cannot tell you how many testimonials God sent my way of ppl going through long-term suffering and then one day God turned it all around. God knows why some of us need longer testing phases, it’s to prepare us, prune us and make us spotless as his bride. If we fight against him, it can take longer like the Israelites wandering around in the wilderness for 40 years bc of disobedience and unbelief when God was finally going to give them land. God knows we will struggle with our faith during extreme testing esp, that is part of the test, but ask him for help with unbelief like the man did in Mark 9:24 as well as Thomas he helped in John 20:27, don’t just give up on God or be disobedient…seek or ask him for help in all areas! You see Jesus was more then willing to help with unbelief for those who asked him for help.

John 20:27 Then saith he to Thomas, Reach hither thy finger, and behold my hands; and reach hither thy hand, and thrust it into my side: and be not faithless, but believing.

Mark 9:24 And straightway the father of the child cried out, and said with tears, Lord, I believe; help thou mine unbelief.

Job 42:10 The Lord restored the fortunes of Job when he prayed for his friends, and the Lord increased all that Job had twofold.

Isaiah 61:7 “For your shame ye shall have double; and for confusion they shall rejoice in their portion: therefore in their land they shall possess the double: everlasting joy shall be unto them.”

Zechariah 9:12
Return to the stronghold, O prisoners who have the hope; This very day I am declaring that I will restore double to you.

Proposal Dream: I was playing the role of someone it felt like for this dream. There was dentist or at least I felt he was, but he was doing surgery on someone’s teeth or mouth area, so not sure if a surgeon for the mouth or dentist. I was cleaning up an outside area, maybe from an event or just helping do charity type work in some way. I was going to get some kind of oral surgery and was nervous. I remember going to his office waiting and talking to his receptionist. I even saw him in the surgery with her and nothing distracted him. He was very good at what he did. At one point we were going to have to postpone the surgery bc it was raining(possibly something causing a delay) and it was some how messing with the schedule or medicine being ready, but he was determined to get it done on time to focus on being with me and he did. The surgeon for some reason was choosing between me and another girl to be his wife and figured out I was the one. Almost like he had another option but wasn’t sure if she was it until I came. He had to still finish her surgery and mine. She seemed disappointed and I was not as excited or trusting to marry anyone at first. He was excited when he finally knew who the one was and I saw him smiling and acting differently like wanting to pamper me. His excitement got me a bit excited. He displayed it all over for others to see and I was a bit embarrassed yet admiring of that. At one point after the surgery I was in a nice dress and him in a tux. There was also something to do with us being at a mall and this is where he also put me on display to show others.