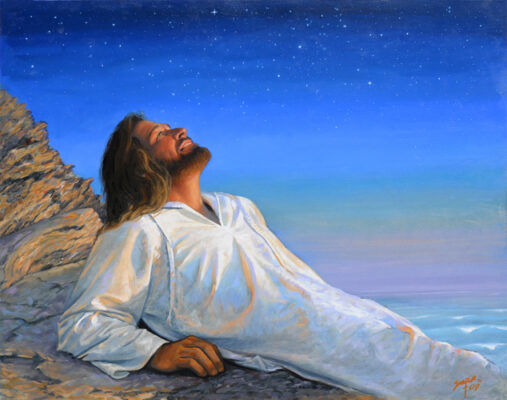 Vision: I saw a vision of Jesus sitting in grass leaning back with his right elbow. He was staring out at the view. I only saw the sky and not what he was looking at. I saw the back of him and his white robe and hair was down to his shoulders as always with dark brown hair. I know he was telling me not to worry about tomorrow, bc he has it all figured out for us. Yet, here I am falling back into worry ab things I cannot change. If we wander too far, it can lead to stress and worry. The vision was like him waiting for us to come relax with him and spend time with him more to enjoy his company and stop worrying ab temporary things. This is his desire for each of us. It’s not easy in this world and he understands and that’s why he has already overcame the world for our benefit. He’s guiding each of us in our individual race and purpose here on earth. When he say’s “I will give you rest”, it’s not just from labor, but also from things that worry us. God knows how hard it is during various seasons and that one solution is resting in him (trusting) and spending more time with him (be still and know that I am God).

Another dream came true from last post: I like to share these testimonials sometimes of things the Lord shows me that comes true to hopefully encourage some of you that God loves to help guide his people. First, the lord showed me a dream of something suddenly happening with groceries and everyone was rushing to finish up in my last post. I assumed the closing was for groceries, but apparently it was our government closing down various buildings and schools again. The other day in our state, they spoke a message to be more strict on lockdown and with closings bc it’s getting worse in my state with corona. Everyone all of a sudden in one day ran to the grocery and there was no more toliet paper around my area left again. That would explain why God showed me an associate was gathering things before others…the associate knew ahead of time.

I laid down the other day and sometimes I see these very bright lights flash very quickly while my eyes are closed. They are not normal and I never seen them before the Lord came, that I can ever remember. I feel like it’s some kind of spiritual awakening from the Lord. Reminding us we aren’t from this world and there is more we cannot see. I def felt it in my spirit the same time I saw it and I have been seeing spiritually so it’s nothing new to me now.

Vision: I had a vision of a man coming off a porch. He had long dark messy hair, blue jean jacket on and blue jeans on with a white t-shirt.

Dream: Another dream I was working with a group of ppl and felt like I was playing the role of someone again. It was a job related place and there were smells or gases being released into the air and we had to cover our mouths and go inside a secure location until it passed. They were playing a horn sound for warning the people, but one lady walked out too soon and I was concerned she was contaminated. I had a white fuzzy sweater on in this dream and it was dark. We were walking around a curvy road at one point.

Dream: Two girls fighting in a dream. One had dark skin and was older and the other light skin. The darker girl was chasing the younger light girl around a cafeteria with students watching. I ended up speaking to the girl and told her Jesus loves that little girl too and would not want this fighting. The girl calmed down bc she also was a believer and hugged me and agreed. We were outside eating and I could tell the ppl were trying to start the fight up again, so I went to talk to the younger girl this time to warn her and told her I calmed down the girl chasing you, and she is not going to fight you anymore so don’t start it up again. I saw ahead of time the devil’s plans. She agreed and trusted me and wanted to ride with me to be around me longer.

Personal: Job related dream that came true. I won’t go into details. Also, I was sitting in a classroom that already let out, doing work on my computer and I moved to the front after everyone left. There was a toddler boy I was watching and he was really funny and smart. The next class came in and the teacher did not sit in her seat in the front but behind me, like watching what I was doing. I was doing something with writing.