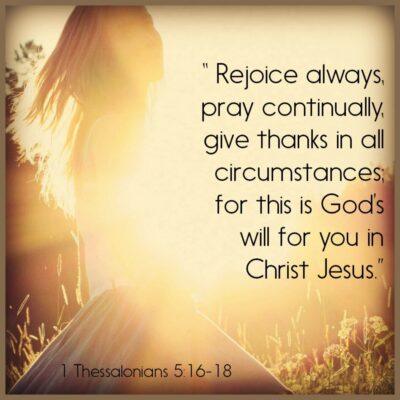 Lord help me to decrease and your spirit to increase in me, so your words can spring forth and bear fruit as you wish among your people. John 3:30 He must increase, but I must decrease.

Prophetic Word: Excited (I saw these words in pure white form again.) For some of you this means get excited again or rejoice about what the Lord is doing in secret for you or has promised you and the things to come (this is a reminder esp if your going through trials), we can’t always feel and see it, but he is always working things out for our good and his purpose and that we should be excited when our faith is tested, bc after this he has many promises to be excited about and one of those promises is eternity with him John 10:28-30)
1 Thessalonians 5:16-18 – 16 Rejoice evermore. 17 Pray without ceasing. 18 In every thing give thanks: for this is the will of God in Christ Jesus concerning you.
Romans 8:28 And we know that all things work together for good to them that love God, to them who are the called according to his purpose.
1 Corinthians 2:9 But as it is written, Eye hath not seen, nor ear heard, neither have entered into the heart of man, the things which God hath prepared for them that love him.

Heard Jesus say: We will be missing those at the table. I know he meant the bride table with him and that some will not be there.  I think this makes him sad like in the visions he showed below.

Visions: I saw a very quick vision of Jesus looking at me from behind some kind of dark object. Then I saw another vision of him on a dark hill sitting and praying. It was night time and dark all around. He had his hood up. The visions of Jesus show him praying in darkness for his people to open their eyes, ears and heart to him during their times of darkness.  He prays for us and waits for us to call on him in darkness, but we don’t always take notice bc we are focused on the dark obstacles all around, not on the light (him).

Dream: I was dreaming that I was at a wedding with my cousin A, sisters, mom and sons. I am not sure who all was there, but I know of these specifically. My cousin was getting married or was setting a date for marriage around the 11th and I told my younger sister I needed to make sure I do not plan it on her day, so I was thinking about taking the 9th. I then am looking at invitations to weddings, these were past invitations and there was so many. Almost like God was saying these were past brides or other brides invitations.

Dream: I saw people getting groceries again before they shut it down early and one guy realized he had to hurry and get things he promised to get the other associates before it closed. This was a sudden and unexpected move the way they had to hurry.

Heard: I woke hearing in the spirit say to a question I asked about a job….Retreat, Retreat Back – Obstacles ahead. Then I heard “My Grace is sufficient for you” (For those trying to make decisions about jobs, it is really important to get confirmation from the Lord with any moves despite what we feel or see around us….he knows best! Test Test Test the words of the spirit to confirm a word is for you. The Lord ultimately seeks to speak and guide us individually)

Vision: I saw a quick vision of an older lady with down syndrome and she was pointing at me like saying look it’s her. I am not sure why, but I have mentioned this so much before that God has consistently showed me visions of so many people and I have met some of them a day or few day’s later. This lady had white short hair with some gray in it and it was not past her shoulders, black rim glasses and a white short sleeve type top and pink jogging pants on.
Hearing singing from angels in the spirit: I was hearing repetitive singing to the Lord, so much that I had to see if my mom had her tv on. I didn’t write down what I heard due to distractions and forgot the exact words, but it was praises to him over and over. It was a man and woman and it was beautiful to hear. it made me realize the angels never cease to stop singing praises to him.

Dream: (3 bears). I was dreaming of three black bears and one was a toddler sized black bear. I was with a guy and one other person. This other person I did not see but felt they were a young girl. We were camping in the woods and the guy came over by our sleeping bags to use the bathroom in plain daylight and I said to him, why are you not hiding to do that? He said, “Because last time I did that a big bear came”…I wasn’t sure what to think, but right then a big black bear comes right up behind me and he took off running into a house nearby. I got down on the ground in a submissive type position and the bear hovered me. I was not scared of the bear then. I got out from under him slowly and ran in the house. In the house the bears were trying to get in, but I was building walls and obstacles to block them. There was something about a few young teenage girls swimming and they were not being led by God, but wild/careless and so I had to outsmart them also. This has been a repetitive type dream. The bears are the obstacles in life or test, and how we handle it depends on the outcome. We have to learn to be wiser then a serpent. Matthew 10:16

Dream: (3 cars). Me and my two sons were driving these cars that also cut grass or weeds. My car was the best and easiest to drive, my younger son had the second easiest one, but my older had the fastest car and he could not control it. He even drove into the side of the wall. I thought for a moment, maybe I should give my son my car, but we cannot give our cars away. The meaning of this dream is we all are given our own gifts and test or race in life from the Lord with the capability to drive it correctly with him by our side, but if we don’t have him…the car given will be out of control. We will want the easier car, but we can’t share or trade the life God gave us and some of us go through our own test to finally get the easier car….we can’t bypass any of it and we can only learn to steer what is planted in our own life remembering his strength is made perfect in weakness. We have to learn who is really in control of driving our life. God showed an example that my older has the faster car as many of you do, when you learn who is really in control, you can master that faster car in the race. Without him, you will be driving into walls.  In the end, the slower controlled cars will finish the race faster hitting less walls bc they put their trust in the Lord. You can do nothing apart from him… John 15:5