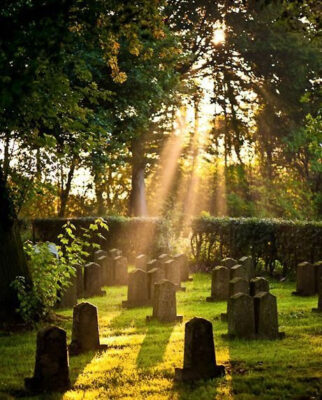 Before I fell asleep I said to God, “God if your still with me can I see you again?” because if I don’t see him for a while I start to think he left me though I know it’s not true as I experience him throughout my days still or a prophetic word still. I still like visual confirmation from him as I am a highly visual person and every time he shows up for me if I ask, but the message he gives when he comes is always a message for other’s too and sometimes has more then one meaning. I dreamed I was riding with my younger sister who was driving. It felt like we were traveling. I was on my cell phone possibly and I look out the window and I see Jesus at a dark cemetery. It felt like I saw him more then once at another cemetery. He was standing full figured with his white robe and walking towards me. He had a golden light all around him showing his glory and his robe was bright white. After we passed I smiled and told him thank you for showing up, but then I asked if my sister wanted to see him and that we should go back. We both felt he already left, so decided not too. I remember being so excited to see him, and then sad we could not go back. I also wondered why he showed himself at a cemetery in my dream. I found out the next day from my sister that she visited a cemetery that day.
I think often we pass Jesus by and he is standing among the dead in spirit hoping they will notice him and wake up to a deeper walk. Most pass him by and I felt the sadness from that. He gives windows of opportunities to meet him more on a deep spiritual level, but we get comfortable. The final message was…It will be his glory in the end for those he does get or things he does in our lives and those who walk through the fire with him despite what the world throws at you. The road is definitely not an easy one when walking through fire and being refined.  He will take as long as he needs to refine us.

I forgot to add I had a very detailed dream about this guy God has been talking about for more then 4 years now. The details he gave me I decided not to share for various reasons, but most of them have been repetitive things God keeps showing me. I wasn’t thinking ab this promise when he gave it and tbh I feel like a broken record and it has become frustrating lately to talk about the repetitive dreams and visions I keep seeing of this guy. I thought it was time, but apparently not. Maybe like other’s who got a promise and God’s timing was not what they thought he meant. Anyone who has experienced God making a personal promise know there is a long wilderness walk there with him first.  Like climbing Mount Everest, the higher up you want to go with him the harder opposition gets with winds at high speeds, below freezing temperatures and you feeling low oxygen at times, but at some point you and him reach the top. That is seen through so many testimonials.