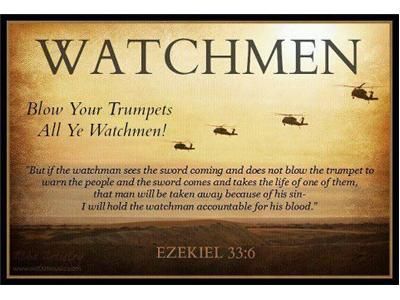 Watchmen Calling Dream: I saw a group of people standing outside near a forest. Some were family. I remember seeing the danger ahead of time and told them to come in. I saw two tigers coming near. The group of people started to come inside, then I saw a pack of wolves coming around a road getting closer and I yelled and told them to run. All the people ran at that point. Then I saw a big bear coming near and my sister was still outside bc she felt she could trust it, but i told her no and she soon believed me and ran in. I saw the bear running behind her and saw he would be able to get in another route, so I put up a barrier to block him and told the people to go in a closet for extra protection. They were all safe. I know this dream was about my calling as I have had many like this, where I warned ppl and they would not listen, or only half listened. A watchman see’s the danger or the message from the Lord ahead of time to deliver it or warn the people. God has been repeating and confirming this to build my confidence in my calling. I know I am still in training and idk when or if he will move more publicly aside from this site, but feeling more and more ready if he decides that.  So far, I have been speaking and warning/revealing to so many in secret/private that he sends me too or sends my way.  If this is all he wants, I am ok with it.
He’s taken me on such a long journey of teaching and training me in amazing ways. My desire is to be what he called me to be for him and to help as many as I can. I know my role is not glamourous like some callings, I work behind the scenes more at the moment, but I know who watches me and takes notice and he is all that matters to me anymore.  I am not perfect, but I don’t care what other’s think as much as I care what Jesus thinks. He gets us all to this point eventually. Jesus has been showing me I am on the first watch, and I am not sure fully what this means yet. He always clears up things with time. A lot of what the watchmen do is really on the spiritual side, because we fight not against flesh and blood etc…This would explain why he showed me so much in the spirit and is building my confidence in that area. I am still learning and growing in this part of my calling, and maybe that is forever now.

For the longest time I avoided these messages he kept showing me as being his watchman. It was not my idea of a great calling if I looked with my fleshly eyes, but he has taken me around to observe many ways the devil moves to confuse people (his churches) to teach me why and now I see the importance of a watchmen. All the dreams of me defeating the devil and helping other’s, was part of that training. You can easily see me as a weak shy girl with your flesh eyes, but God apparently saw more in me then I could even see. I am weak, so his strength can shine through more powerfully!

Vision: Saw a huge fire behind tree’s and there was white smoke going up everywhere. It felt like a forest fire breaking out or a big fire by a lot of tree’s. 10-16-20

Vision: I saw a motor home by a college nearby, like it was parked. I knew the meaning of this vision and it came true right away.
Dream: I was dreaming of being in a college and left my things on my desk bc I felt I could trust the students, when I came back they stole my ipad and old iphone, as well as my backpack and other things. I was going around to the people higher up who could not find it and I remember feeling frustrated bc they weren’t doing much I felt.

Dream: I dreamed of a guy that looked like “Jason Momoa” he was working near me and he was standing on a ladder and I took notice and felt he was the one God spoke of, after he noticed I saw him he could not take his eyes off me and even broke rules to sit by me on the bus ride with a group of ppl. The bus stopped and a couple guys were playing football in a field. Apparently my dad liked this guy in this dream also. I knew this dream was a reminder of God’s promise and showing me small characteristics of this guy coming bc he was showing me that this guy will pay attention to me and not be able to stay away. This dream was confirmation of that. The reason for Jason Momoa is bc I always loved how he adored his wife and he has hazel eyes. Never paid attention to that before, but more confirmation that he will be good to me the same as Jason is to his wife. Again the guy also had a playful side to him.

Prophetic messages: These messages/dreams below I am keeping to my private diary only and didn’t feel I should share them publicly.
Words I have been seeing a lot: Apex and 222 (still seeing these numbers a lot).