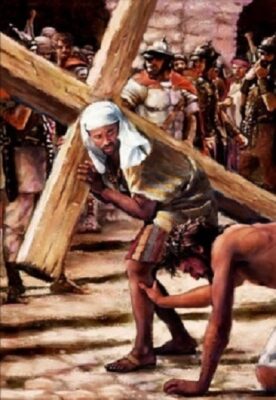 Jesus showed me two different nights three different visions in the same chapter of Matthew. He really was teaching/confirming and he revealed/reminded me of some mysteries below some may not be aware of. Also, he spoke about Kingdom marriages again below and has been repeating “becoming one” a lot since he said it last post…

Visions: I see Jesus in the clouds with a white cape on. His clothes look like he was dressed more as a King this time. A man came and took his cross and carried it for him. The day before this vision, I saw another vision of Jesus and he was sitting on the ground with the blood stripe marks down his back with his head facing down and hair over the sides of his face. Another man was standing next to him and this was in a street. This vision made me sad to remember what he went through for us. The third vision I see this almost night time scene with dark purple colored clouds and a see a white cross in the center with flowers around the base. All these visions made me realize he is teaching us and reminding us his words and history here on earth was very true. These are past scars maybe he has not erased from his memory on purpose yet, the same as we have to hold past scars of pain. He really did come here to show us how much he loved us, that he would die to save us and him reminding me of these scriptures shows it has not left his memory and he uses it to teach us and help us grow with him bc some of us suffer much also here on earth. I am thankful for his reminder’s, it helps me stay humble and remember how much he really loves me. When you hear into the spirit, you now have access to hear some of his thoughts and see them. This is his holy spirit that reveals things to us, so he is not silent with his people. How much do you desire to hear and see?

Matthew 27:26 Then released he Barabbas unto them: and when he had scourged Jesus, he delivered him to be crucified.
Matthew 27:32 And as they came out, they found a man of Cyrene, Simon by name: him they compelled to bear his cross.

I want to point out something here God showed me a long time ago….see who persuaded the people to kill Jesus….it was the priests and elders of the church. Matthew 27:20 But the chief priests and elders persuaded the multitude that they should ask Barabbas, and destroy Jesus. Jesus warned us many different times about who is really my brother and sister etc…, so be careful to not be religious. The same as they did not recognize Jesus, you need his spirit to see who truly is his. We worship in spirit and truth. Not just truth alone, but both. You search the scriptures, but you don’t find me Jesus said to the priest. You can know scriptures to perfection, but if you don’t have and know the things of the spirit also….you will miss his true followers and him. So every time someone comes at me that I need to go sit in a church building, I gently remind them of these things. His people are his church and we are going out into the world as Jesus did and God needs no wall’s to get the job done. I am not saying this for everyone, but some of us are called differently and we should never judge someone else’s walk or calling. Jesus knows their hearts! If you don’t love Jesus, your just learning how to read a really great book, but if you love Jesus or ask him to help you love him, you will find out how real those bible words really were and are. If you don’t have that love, simply ask him for help. He gave Paul a new heart! Don’t put God in a box, nothing is impossible with God!

John 5:39-47
39 Search the scriptures; for in them ye think ye have eternal life: and they are they which testify of me. 40 And ye will not come to me, that ye might have life. 41 I receive not honour from men. 42 But I know you, that ye have not the love of God in you.
—————————————————————–
Kingdom Marriages Visions:
Hearing God Speak About Aligning Kingdom marriages now. I see this dirt dark scene and I start to see things popping up like grass growing and I knew they were marriages for the Kingdom.  It also started to be more light.  I heard God speaking about putting together a lot of marriages, though I don’t remember word for word how he said it, I remember exactly what he was speaking about. Forgot to add another vision I saw shifting also on the ground and there was a lot of shifting taking place.
I also have a vision of a young girl (dark skinned) who had her hair split in the center and pinned up in the back with a really pretty white sleeveless wedding dress on with silver or white beads in the front of it. She was in an outside grassy area by the white bride and groom table at her ceremony. She had another friend with her who was a bit shorter then her and they were laughing, both standing up. She was so happy to finally be married. This was a kingdom marriage God brought together. I think I recognize the girl as one of my friends who also is waiting for God bc he has revealed her husband to her. (Adding that God confirmed this was her with her bff who is shorter and it came at a perfect timing for her.  Amazed!)

———————————————————————
Heard in the spirit: I got rain for you and dust and something about routine
Vision: I see a man’s hand with an orange glove on his right hand reaching into a fridge to fix it.
Heard: The protection is on your mission trip (not sure if this was a message for someone)
Dream (I felt I was in the role of someone else like a watchman): I was helping a guy with dark hair that I felt I knew from youth. He was not fully mature yet though. i knew he was the one and so did he. He came to my house everyday bc I was sick. I didn’t want him to one day and told him to just text me. I think he felt kinda sad, but understood. He was going out shopping with his mom to a mall. His mom wasn’t coming and the reason he had to go was getting to close that he had to go ahead and go without her. I fixed his TV for him at one point, bc he fell asleep and the volume was too high and I was too tired after that so I laid down beside him and fell asleep. (This dream felt very similar to the last dream ab the young girl who died and was sick. I am not sure if these two were married and met young, but that is the feeling that a man lost someone close to him and maybe he is struggling to get over her)