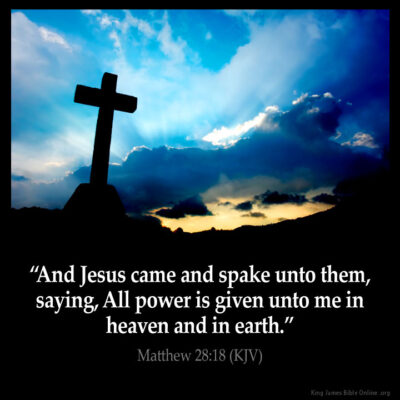 I saw a vision of white words and first I saw, “Get Ready For” and then I saw “Jesus + Power” God is getting ready to do something big in some of his children’s lives. I feel he will be moving in the world with this message according to the dreams and visions I had below regarding those dating being deceived and his joined marriages, prayer request as well as stopping some attacks on his people. Jesus sometimes stamps his approval on the words I see by showing me a vision of himself directly after, so I saw a vision of him standing tall in his white robe to the right, with his hood up looking down to the ground. His hood up meant he was in prayer.

Vision: On another night I see Jesus again in his white robe standing in front of ppl coming and going around him. He was helping them with something. Possibly answering prayers.

Vision: I see a clear vision before I fell asleep of this mixed girl with dark permed hair. She had half of her hair pulled up to the back and the front bangs were split in the middle and hanged down just above her ears. She had very thin gold rim clear glasses on. She was sitting in a home talking with someone and she did not look confident in this person or what they were saying. Like she didn’t believe them. At the same time, I felt she had a bit of pride regarding something she was discussing.

Vision: I saw a text message about a friend, then I saw another one. (this was a personal message and I am discerning this one personally…Satan has tried so hard to confuse me lately, but God’s plans never fail!)

Dream About Couples Joined By God: I see these couples in this dream being joined finally together. It was like they did not know one another and would have never expected to be with that type of person, but God joined them for a purpose. They were all nationalities. One couple specifically showed that one of the spouse’s had adopted many children or had many children she had to help take care of now. These couples were going to be moving as soon as they got married.

Dream: This involved two twins moving into their parents home temporarily and one of them was looking on dating apps for a guy and she wanted to be fully honest about who she was to attract the right kind of Godly man. Their parents own a houseboat type restaurant and they had to maintain that also while their parents were away. They were also babysitting kids or kids came, but not sure whose these kids were. I believe in her other home was a man who could not speak or was too shy to say but he was trying to give out signs that she could not understand. He was trying to say he liked her. However, it was a red sign and as I got closer I felt he was a deceiver.

Snakes- I had a couple dreams of snakes and one I found it ahead of time before it did damage and the second a man caught it and was trying to do his job and hold it at the same time from hurting anyone, so I built a trap for him. It was like he helping other men prepare or get ready for something. This man was trying to juggle the demon and his job and the other man refused to help him. These snakes are representation of demon’s or attacks. We should all be aware and catch these in the act or ahead of time before they harm God’s people. We should all help one another. In the game I played, this was one of my task by God…Through me he was revealing the plans of satan to many, though many dismissed me bc they did not understand how God works through me…but wiser then a serpent is not always in front of your face stuff. His way’s are not our ways, and this is one of the reasons for it. To protect and to reveal, to pull weeds and to set us free…