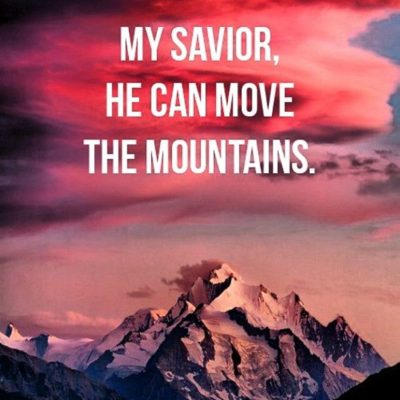 Vision: I saw the Lord running over mountains quickly and I could see his brown sandals and he was holding his robe while he ran. He was running to help his people. God just made me realize and had to add that this vision was God responding to my last post…that song I posted. “Over the mountains and over the sea, here you come running my Lover to me.” Jesus is our Lover and he will come running over mountains for his people. I think the word he gave me below “Move” is what he wanted with the vision, bc He will move mountains for those who trust and love him.

Vision: I saw the word “Move” again in that same program I was in and I have been seeing this word a lot lately in visions, dreams and awake.
Dream: I was talking to a prophet about what God has done in my life and he was giving me advice to help me get through. I look at his eyes and I could see God’s eyes in his so I knew his words were from the Lord. While I was telling my testimonial God gave me a vision of a map, like it was directions for help.
Heard: I heard a woman voice(maybe an angel) say “God is proud of you”
Vision: I saw my brother in a white tux and he was talking to a few people and smiling. I believe he was at his own wedding and he was happy.
Dream: I saw money as something different. It was like a new form of bills like a different type of paper used that was better.
Dream: I saw my sister in a hospital and she just woke up from getting surgery, but everything was ok.
Dream: I dreamed people were getting worse from the virus with stealing and not wanting to be close to others. Their hearts were getting worse and it was harder to trust people. It seemed like large groups becoming more hardened in their hearts.