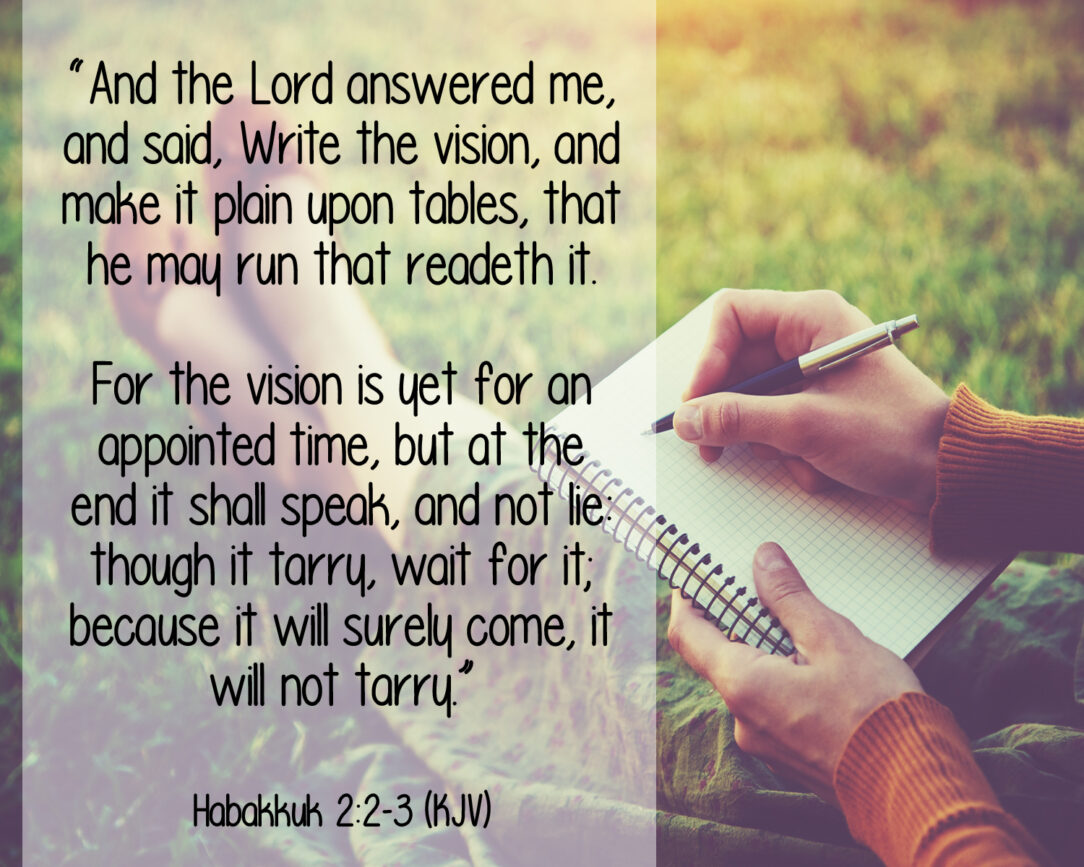 I saw more storms coming in a vision and then I saw words being formed from God. Another pattern God has shown in the past. Then I saw a notebook like the one I write all my messages from God in. Then I heard God say “My people better be ready with their notes on paper”

What did the lord mean? Well he said it in his word and he has repeated to many of us as well. If he gives you a message, a word, or promise, then he ask us to write it down to remember what he say’s is true and will come to pass even if it takes too long or looks impossible. I forgot the first part of this verse bc I only had the second part I saved on my wall, regarding the promises God gives us. I saved Habakkuk 2:3 and put it up on my wall to remember, but did not remember the first(Habakkuk 2:2) was to write it down and God brought it all together so amazingly to remind and encourage me to stay devoted and what he say’s is true. It was a reminder to us that when we write it down and if he said it….though it may tarry for a time… it will come true in his perfect timing!

Habakkuk 2:2-3
King James Version
2 And the Lord answered me, and said, Write the vision, and make it plain upon tables, that he may run that readeth it.

Saw a vision of an arm reaching for me to help me.

Visions: I was seeing Jesus again in visions throughout the night while waking…one he was standing sideways in his white robe and then I saw another the back of him…he was bending down to do something and I saw his hair was long past his shoulders dark brown and some waves in it…I saw Jesus on a white horse and the bottom was faded a bit, this vision was like an artistic painting of him. He had on dark blue robe this time in this painting. I could sense his strength on his horse and he was looking out like going towards something.

Some of these dreams below are for others, and the Lord will confirm if that is true for you……

dream: I found many coats I forgot in a school environment. My best friend was there and my sisters got out of someone’s car that I did not trust, but I wasn’t sure he would take us to safety and so I got out with my sisters and felt I did the right thing. These many coats I keep finding has been a pattern I see in my dreams.

dream: I was dreaming of this couple in my car telling me that they just bought a big warehouse and wanted a preacher for it. I told them who I was, but wasn’t meaning for them to offer for me to do it, but somehow I felt the pull of God too despite not wanting to speak in front of people. I knew I had too, but was wrestling with it, then two men came to test me while I was sleeping on a sleeping bag on the ground in the warehouse. One of the men was there with the women. He looked at me wanting to see if I had God in me and I started speaking like Jesus, then we saw this golden light come between us and his eyes lit up and he saw God through my eyes. I could feel God inside me so much at that moment. It felt so pure and made my heart feel so warm. Then he believed me and told the other man I was from the Lord. He also got something out of my teeth for me (possibly a representation of a something that would have embarrassed me.) I still struggled with doubt, but was willing to try for the Lord.

Saw a very clear vision of a chinese man who died and I felt God was highlighting and recognized that it was a mother who was mourning over him. He looked about 30’s dark short hair and clear light tan skin.

dream: I dreamed a girl and her husband lived next to me and their son was young in early elementary aged. He had straight dark blonde hair. He kept coming to my house and something about a picnic table in the back yard on the deck. I told the mom is was ok for him to come to my yard anytime. The mom seemed like she had concerns about him. He wandered off a lot or seemed zoned out often.

dream: I dreamed of a new husband (maybe around late 50’s to 60’s) was fixing our garden in the back yard. I was his new wife and I still had issues trusting him. I believe he could have been in military or that type of strong personality, but he was retired. He wanted to gain my trust and he loved me. I was very busy and didn’t want him to fix up the garden without me, but he got mad bc he felt I did not trust him. Really it was more that I wanted to enjoy it with him too. In the end, after I saw how good he was in the garden, I started to trust him more despite not getting to do it with him bc I was too busy. However, I was also concerned what he would do with some tree’s he pulled out bc we had too many and he didn’t like the way they looked with the other plants. I did not want the tree’s to die. I saw them up on some wood table with white sackcloth wrapped around the bottoms of them and tied to the end of each tree. (The clear message is trust God in his garden as your husband and with his own tree’s or people even when we don’t fully understand why he does what he does)