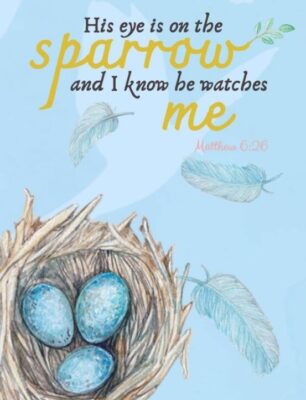 If you feel anything below was meant for you, ask God and allow him to confirm it.

Dream: I saw God getting ready to move everyone in their established positions. His will for their life.
Heard: Cut the losses God has better.
Vision: I saw Jesus from waist up in his white robe with nothing but black surrounding him in the background.
He was facing me and this time I could see his mouth moving while he spoke
and said, “Go find the closet with 3 sparrow eggs and collect them.
I saw a vision of them with a light blue color and a golden brownish color in the middle of each.
I told him I don’t know how to find them, then I dreamed again.
After I find them, I saw a dream of a woman on the internet somewhere, who will give further
instructions. I saw the eggs being opened and there was not a baby inside, but all these shells that looked
kind of like white cotton covered walnut shells. I remember thinking I never thought that could happen like that. Like something unusual. I don’t remember her instructions fully after opening them, but I saw her website and it had pictures and video’s explaining. I believe the instructions were for another time. I believe this vision was regarding provision, protection, his love and further instructions to make sure you listen and follow God along the way. He will be doing unusual things and asking unusual instructions sometimes. He likes to do a new thing. Isaiah 43:19

Psalm 84:3
3 Yea, the sparrow hath found an house, and the swallow a nest for herself, where she may lay her young, even thine altars, O Lord of hosts, my King, and my God.
Matthew 6:26
26 Behold the fowls of the air: for they sow not, neither do they reap, nor gather into barns; yet your heavenly Father feedeth them. Are ye not much better than they?

Dream: I dreamed I was at this carnival and I had a toddler daughter I was holding. Prior to this I was taking a bath and I look behind me and the daughter was also bathing without me doing it for her, so I was shocked. Whatever God births in us spiritually, it will come to fruition even without our help.
Vision: Saw something about a friend having a website ministry and other details I gave to her.
Another vision came true: God showed me a long time ago that there was a deceiver in this church group I went too one time online. I knew who God was talking about, but never told them who I thought it was. I knew God had to show them. A guy on there didn’t believe me and even deleted me as a friend. Later he came back to tell me my dream was true and explained details. He’s now my friend again and God gets the glory.
Dream: I collected a huge cucumber because we got so much rain. I felt this has to do with a big harvest we were helping God with.

A lot of these dreams I am playing the role as someone else, so pray and seek God if this is you:
Dream: I was younger and a girl playing basketball with a team of guys for a church team. The guy was very interested in me on the team and I played better then I thought I could.
Heard: Karen
Dream: Uncle was tired could not work hardly anymore. I saw his pain and he tried to get up to take his dog out and I saw his back bent over too much. I felt compassion and took the dog for him.
I was also gonna buy him a leash.
Dream: My dad got a job and my brother was there, all the kids were. I saw a white skinny cat going into a white fridge with a squirrel friend of some kind wrapped around it’s food. I was the daughter
trying to help her.
Dream: Group of us going on a trip for a basketball team to india. We felt we had to obey their rituals, and when we got there they were all sleeping on the group
on white blankets and covers. They told us we can follow our own traditions and even brought us US gifts and even KFC. We didn’t know they were so nice.
One of the people got lost on the way back.
Dream: Husband and wife selling a house, it was still unfinished, they had a daughter and were throwing her a bday party. They are on the edge of divorce, but
the man had a change of heart and wanted to keep the marriage, so he was sad. They had people interested in the house instantly. It was very spacious.

Dream: There was a religious school and the principal was not teaching God’s ways. They were very hard on the students and I was playing the role of one of the children in elementary age at
first then I was a middle schooler. They were extremely unfair and seeked to punish for crazy things. I remember at one point I was sitting on some school get together and I
told the principal there was throw up beside me and he told me to just deal with it. I asked him if he loved or knew Jesus and he could not answer. I knew in my spirit he did not.
I went up on stage loudly and told them all he did not believe in Jesus and wanted teachers that taught like Jesus. Then I repeated it, I want teachers like Jesus and all
the students got the courage to stand up and say they did too. I recognized this principal as a deceiver and all the teachers were following him.

Vision: Saw a white container with the words “bacteria” on it. It looked like a white laundry detergent container.
Vision: Saw Jesus in some circular object and his face was slowing turning to look out at something. This vision was kind far away.
Vision: I saw a man with short dark curly hair. He was white skinned and working at some counter or cabinet. He was really busy and would not look up.