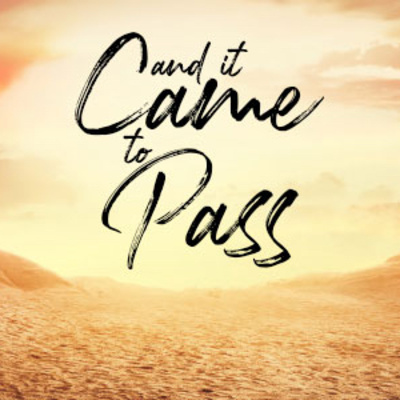 Heard the Lord say “And it came to pass”….This was encouragement for us to keep going and for the promises God made to us.  This phrase is also int he bible over 300 times. God is making a point. Even if there is confusion, or delay, or silence…he promises there is light or calm after each storm. I knew this was a reminder that everything will come to pass. All pain, all sadness, the past mistakes, and the memories….they all will pass. It was also encouragement that promises will come to pass as he said. The Lord has been encouraging me on this walk with him since he started speaking. He has not ceased from sending encouragement my way. He does this with all his beloved who belong to him if your inclining your ear. It never gets old hearing him or seeing him. It’s like a love coming home from war, or a love coming home from work….do you ever get tired of them showing up? We may get tired or confused with chaos around us, but look who we now have beside us…in his beautiful white robe so humble and loving …our beloved King Jesus. If you don’t choose him now, you will have to endure much more without him later sadly. He is giving us all a choice now to choose him or choose our own path. With him we have light afflictions that he can save us from or help us endure now bc we chose him, but when the time comes and the end is near….those who decided to not follow….well do you want to even find out in the tribulation how bad it will be?
2 Corinthians 4:17-18

To add to this the Lord was showing me words of encouragement that I would go through more for a bit, but then he will step in and put an end to it. Isn’t that the pattern of all those on this journey with him as well as in scriptures. Then I Heard “Go To The Source” This source is Jesus, is there anywhere else we can turn during troubles?

Visions: I saw both my sons washing other’s feet and I knew it was with living waters of God. These visions gave me joy to know my sons will serve God by bringing people to him some day.

Vision: I saw a full 9 month pregnant belly and I saw it from an angle like it was mine. These can mean birthing something in the spirit. A gift or calling etc…and not always a child being born. After this I saw the word “Sacred” This can mean it’s proceeding from God, set apart or dedicated to God…All our gifts from him are for him and the Kingdom.
Definition I found: Sacred. sā′kred, adj. set apart or dedicated, esp. to God: made holy: proceeding from God: religious: entitled to respect or veneration: inviolable: devoted to destruction: opposed to secular, as sacred music or history: not liable to punishment.

Dream: I was with a girl who was on a video next to me and a man sitting across from me. We were both going to pray for him and others who were sick or had cancer, but she just broke down and started crying so I prayed for him. I knew her tears were prayers too. I felt that so strong in my spirit when I woke.

Heard: I forgot to add this name last post….I heard the name “Isaac”

Dream: I was taking care of two dogs. One dog (black lab type dog) was very wet and he slept like that all night, so I got a towel and dried him and fed him and told the owner to make sure he has water and they did. He had the saddest eyes and then I saw him laying down happier after he ate. The other dog was smaller. I found both of these dogs a home.

Dream: There was a friend of my past, and she was living in a home and I came to help in some way and her mother gave me gifts. She left all her doors open with no fears, but I closed them to protect her. I know this is a spiritual meaning, I helped protect her in the spirit somehow.

Dream: I was playing the role of a female and was in the poor part of Africa and I had a black top on. I felt more hispanic or arabic? My skin was very tan. I had a frilly short black top on that someone sewed for me, but it was not sewed right. An Arabic man? came on a horse and he was wealthy. He saw me and wanted to help, but for some reason had to hide it bc he cannot associate with poor people. He had two woman sitting at a front desk office space he owned and he told them not to speak of him helping me.

Dream: I was trying to hug some people and they turned me away.
I was hearing someone speak in hebrew language and then I saw a vision of some kind of symbol, but I did not write this down and forgot it fully, but it looked like the shape of heptagon, but the side tips were out a bit more and more rounded…not pointy. I believe there was black lines throughout it also. I was writing down what I heard and some strange item was put in front of me like an eight-ball looking device to try and trick me, but I shook it and said I won’t believe you. I knew it was not God. I think this is a false spirit.