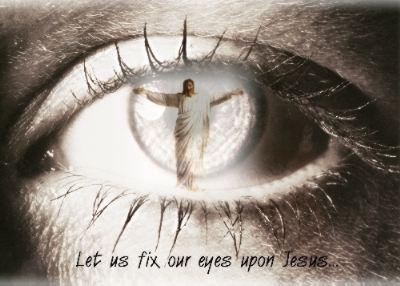 Vision: Jesus eye…it was at first a dull green…then it turned brown, then it settled on like a dull hazel color with a white light twirling around it slowly in the outer part of the iris. I first saw his full face, then his left eye was so close to me liked zoomed in to show me his eye. I think he was showing me he had all three colors in it somehow. He had a happy spirit when he showed me I felt on the day I got this vision. A great scripture to go with this vision is to fix our eyes on Jesus… Hebrews 12:2 Looking unto Jesus the author and finisher of our faith; who for the joy that was set before him endured the cross, despising the shame, and is set down at the right hand of the throne of God.

Vision: I saw Jesus in sackcloth and he was reaching for something. He was in mourning or sad about a situation from people turning away from him. He’s reaching out them, but they reject him. This vision was on another night when I witnessed to two people who completely rejected him….he showed how it affects him to hear it through us and bc I felt such sadness I know it came from God. Remember God is in us and hears and see’s and feels what we do and shows his feelings to us too. God does not like rejection just like us. He’s put a lot of love into us, thought and time, yet we still turn away from him. If you really pay attention to the patterns in the bible every time God was rejected or his people…look at his responses or actions….God feels love and hurt too! He shows me that with these visions of himself.

Dream: I was seeing all these wild men running around and one little girl. This girl I had to watch as my own but she was a little wild too wanting to run with the boys. I called her in the house and she came so I could protect her. I went out looking for her another time and I saw the storms coming and told her God was not happy and I see his wrath coming, but instead there was sunlight. I then saw 3 woman holding babies and they were all handling them carelessly and I got upset and told them all they were not treating their babies right. i knew the babies were their gifts from God and I knew a storm was coming bc of God’s wrath, but instead God gave grace.

At one point in this dream there was me and another person and others shooting at us…the other person with me had the baby. We were shooting back at them, but it seemed I had no more bullets left and was trying to figure out how to get the baby back. Satan seeks to kill, steal and destroy our gifts from God also…we have to do our part to protect them. We have to stay close to God for help and protection.

Vision: I was seeing a vision of a russian face. His hair looked thin and light blonde and he had very pale skin.

Visions: I had multiple visions of several people and Jesus in different quick scenes. I had these back to back very quickly, so i didn’t document details. Not sure who all these people are, but possibly the body of Christ.

Dream: A younger boy middle school age was driving a car and the older brother was on the passenger side. They were going to a grocery and the younger boy was crying. It had something to do with the mom neglecting them and it felt like his brother was making him do things he didn’t want to do. I saw his tears and went up and asked him what happened and prayed for him.