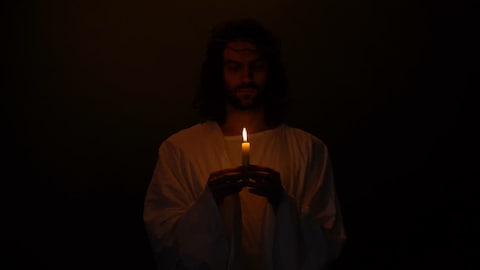 Vision: I had a similar vision that I had before months ago where I saw Jesus sitting at his workshop table. Last time I saw him at this same table, he was stamping an envelope that I knew was for me with a red seal stamper and smiling. This time he looked more serious and he had a candle on the table that shined in his face. He was doing something, but I am not sure what. I think this vision just showed me he is working again and the candle is light in the darkness. The scene was dark, but the candle glowing. I keep seeing similar visions of this candle shining on him lately. He had his robe on again, but I think he had some earth tone sash on this time. It was a very quick vision, so that’s all I can remember. I had a few other’s every night since my last post where I keep seeing Jesus watching me. Two he was in outlines or line art and farther away. One he was up closer and realistic again, but I only saw his chest area of his robe. He is closer then we think.

These are not all my dreams, I had a lot, but these are the one’s I am sharing and making it known that God gives us warnings ahead of time.
Dream that came true: I had a dream ab the attack on the president around July of last year 2020, so I believe it was a warning. In that dream I was one of the men working for him. I explained it as round type building with white walls like a football stadium in the inside, but I did not see the outside and the white house has a white round part. I knew in this dream there was attackers that entered and that is why I ran to the secret location where the president was not at to get weapons where his office was located. There was something ab a bomb too, and there was a bombing around this same time frame. My dreams are jumbled together around specific time frames, but the meaning is the same and the fact is he was attacked and God gave a warning, but who listened? The Lord reminded me of this dream.

Dream that came true: Not sure if I shared this dream in the last post, but I saw a guy trying to break in my house and my son’s were younger then. I had a few details ab him, and later found out that same day someone tried to break into my sisters house who has two young sons. If you notice I am playing the role of people in these dreams a lot, but I was not aware this could be ab her.

Dream: I saw in this dream a planet falling that was also like outlines or see through with big craters and it had a tag with a name, but I did not catch the name of the planet. It was a big planet like earth and I saw it falling to the left front of my view. People started noticing that this planet fell and were in shock. I felt it was a planet, but not sure fully.

Dream: I saw a girl speaking and she was cleaning and telling people to step out in faith. She was like an influencer.
Dream: Another dream where a couple was getting messages from God that it was time for them to go home with him and they were excited, they wrote a letter to their children to say good bye, but then God said it’s not time yet and he wanted to use them longer on earth.