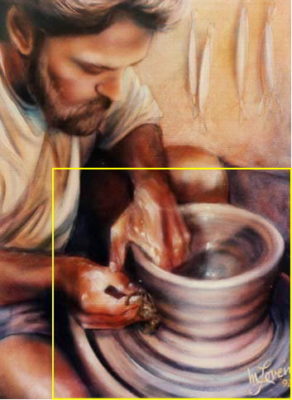 Vision: Jesus Was Molding His Clay

Vision: Jesus was at the potters wheel molding clay. He was in his white robe sitting down molding the clay with his hands. His face was looking down and more serious. I saw more details of his face this time. It seems the slower the vision is, the more detail I see and the faster, the less detail I see. He had his dark brown hair and somewhat long dark beard. it seemed he had some red tones in his hair this time. Maybe this is bc the vision was slowed down and I saw more details. We are clay in his hands (See All Scriptures below references this) and he shapes and mold’s us the way he wants us to be for his will and purpose. Does this sound like we follow our own desires always? if he gives us the desires of our heart after we go through the fire with him, giving and doing it on our own strength is two different words eh? If you do his will, it’s not your will be done, but his! This is another reason the road is narrow, and sometimes molding clay is a serious matter to him. Be ye not as the horse, or as the mule, which have no understanding: whose mouth must be held in with bit and bridle, lest they come near unto thee Psalm 32:9. He will get you close to him and understanding one way or another if you belong to him. Sometimes we are like a horse or mule being broken in. We fight against him sometimes, bc we don’t understand always his ways.
Interpretation: We are the clay. We don’t always mold with ease, possibly bc we are not close enough or hearing him clear enough at times. The closer we get to him, the more we will understand what he is doing and why. I realize though on my journey with him there are times he is silent and that is part of him showing us how much we truly trust him or lack trust still.

Ecclesiasticus 33:13 “As the clay is in the potter’s hand, to fashion it at his pleasure: so man is in the hand of him that made him, to render to them as liketh him best.”
Isaiah 64:8 But now, O Lord, thou art our father; we are the clay, and thou our potter; and we all are the work of thy hand.
Jeremiah 18: 1-6… The word which came to Jeremiah from the Lord, saying, 2 Arise, and go down to the potter’s house, and there I will cause thee to hear my words. 3 Then I went down to the potter’s house, and, behold, he wrought a work on the wheels. 4 And the vessel that he made of clay was marred in the hand of the potter: so he made it again another vessel, as seemed good to the potter to make it. 5 Then the word of the Lord came to me, saying, 6 O house of Israel, cannot I do with you as this potter? saith the Lord. Behold, as the clay is in the potter’s hand, so are ye in mine hand, O house of Israel.
Isaiah 29:16 You have everything backward! Should the potter be thought of as clay? Should what is made say of its maker, “He didn’t make me”? Should what is shaped say of the one who shaped it, “He doesn’t understand”?
Romans 9:14-24 – Please read this also as it shows him speaking to his clay.
———————————————————————-
Vision that came true right away: I had a vision of first the bucket I use to dispose of water and then I put a drinking cup in it and all the sudden the water around it was muddy. I pull the cup out and it was clean water. I was thinking this vision makes no sense God. Then all of a sudden that same day my drinking water hose bust and muddy water was all over the laundry floor. The laundry floor still is concrete and looks a bit muddy colored in tones, so it did look muddy. I got so upset, because I just fixed it and yes I rigged water in the basement to a stainless steel sink for like 20 bucks lol. Where there is a will there is a way for southern girls lol. This is where I am so much like my dad. I tried to fix it and could not, so I went to bed early discouraged and frustrated with God bc it seems when i try to stay positive all of a sudden everything falls apart again. No one ever offers me help either, it’s just been me, but that is where God wants us in the wildnerness…relying fully on him and not man. I laid there and God instantly put an idea to try another part I had forgot I had. I put the part on and saw water was still coming through, so I instantly realized did I forget to turn on the red knob? After I turned it back on it worked and no leaks this time… luckily I had another drinking hose and I connected it and put it on and it worked. I was thanking the Lord for telling me to try again. The vision showed first the water was clean, then it would be dirty, then clean drinking water again and it was true. Why can’t he just speak clearly sometimes lol Thank you Lord for helping me when no one else cares.
———————————————
God said: Now you are understanding
Heard: Getting a gift, I’m ab ready to obey
Saw: “Listen, you are coming (along or out?)” and I saw “Trials.”
Vision: I saw a water bottle splash in my face as I put it on table and this went with the water vision i believe.
Vision: I first wake up to smell this very strong cinnamon vanilla bean smell for like a few minutes. I was looking around thinking is my mom here, but she was asleep upstairs. The smell came from nothing, then i close my eyes again and see a vision of fire shooting from my finger and then I see this bright white light blinking. I knew this was Jesus.

Dream: I was at a restaurant and talking to a man who was friends with Travis and at one point I saw Travis sitting at another table by himself eating. I am crying to this friend at another table and begging to please tell me why he won’t talk to me anymore and it seemed he confided in this man more then me. I felt we became very close friends and he just left me. He trusted this man’s opinion and would rather spend time with him. The man could not say fully why, but he tried to explain things and sadly I can’t remember what he said. I took this dream as he listens to this man’s advice even over his own heart. If we listen to any man over God, then we make them an idol over doing the true will of God, bc I know for a fact God tells us to go and make things right with our brothers and sisters first. We are supposed to see all our brothers and sisters in christ as the same, but sadly some only have their group of friends and discount all other bodies of the Christ. Anyone in the family of Christ or outside is just as important to treat right as my best friend to me, bc they are that important to Jesus too. However, I am not discounting that this could have been Jesus in desguise as the close friend.

Dream: i dreamed satan was attacking a family through an electrical current in their home. They were scared of him. He was challenging the husband and made him play basketball with him. If he won basketball, then he would leave them alone. Satan turned into a see through man with electricity flowing through him and a white basketball uniform on with black numbers and outlines. He had other demons playing too.

Dream: I dreamed of a guy who took msm (I had to look this up) and he seemed a bit druggy by things he was taking. I knew he was a good guy though and he told me God told him to pull the car over bc of me. He had messy hair also, and a white scarf. He also had a girlfriend, but he liked me. I was not convinced he was the one. This dream had something to do with eating at some hotel with like a denny’s in it and it was a group of us?

Dream: I dream of all these little girls who were being sexually assaulted and they were in this hospital clinic being prepared for a surgery bc of it. Maybe they were being tested for it? This hospital was in an office building bc the hospitals were too full now. I am in line with this mother and daughter, both have blonde hair and I am helping them. The mother was 9 months pregnant and holding a lot of stuff, so I hold them for her. I remember it was broken jewelry or missing parts of jewelry. It was a lot of stuff, which made me think a lot of baggage she had to hold. I asked the little girl who was about 3, but very tiny if she trust me yet and she didn’t. I said well do you trust my son and my younger son came around the corner and she ran up to him and jumped in his arms. This was cute. I then am standing at the desk to talk to the nurses and it was a white countertop, I look over and see a man being operated on with little covering around him for privacy. There was people all around this office building being operated on. I remember at one point thinking maybe this little girl was not sexually assaulted bc she trusted my son who was a man, but I was not sure and very sad about the whole dream. The evil of this world breaks my heart daily.

Dream: Something about traveling with my son to find a hotel in britain? The city I believe started with a B I assumed it was in britain. Gonna look into this more. Updated: I believe the place in britain was Brahan possibly and I am researching and find this interesting topic of a seer who was gifted and killed for telling her a vision from God. So sad. I actually commented bc God showed me the meaning of the “Black Rain’ in one of the prophecies that the people did not understand in this article. Let’s see if they accept my comment, but if you have been keeping up with my post, you know the meaning of rain drops also from the Lord.