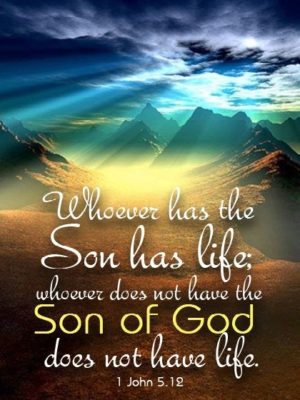 I had a vision of the words “Life” very big on a magazine cover on my dresser and this time the words were in green. I wasn’t sure if this was from the Lord at first as I normally see white words, so I waited to post with hesitation. Then I see this video popup that really spoke to my spirit and I felt it went with this word I got from God as he talked a lot about LIFE in it. I am also posting scripture references below. This man has a beautiful amazing testimonial and I watched him a few times and he def aligns with what God has taught me and even speaks the words I am thinking that day at times. This to me means his spirit is aligned with God’s. This is how God can speak through his people and your spirit can discern if they are from him. God has been talking about provision lately and the words being green this time could represent that, but the message for you in this video could represent something else also. It depends what the Lord is speaking to your spirit personally about with Life. His words from the Lord are powerful bc of his great enthusiasm to give out God’s words. If you don’t know the Lord yet, please read the scripture below before watching the video.

Scriptures on Life: https://dailyverses.net/life/kjv
———————————————————————–
Vision: I woke up this morning seeing this same man again with short black hair kinda wavy on top and he was smiling with his mouth open and looking very happy. He kind of jumped into the view with joy and I think his arms were outstretched also. I woke laughing like who the heck is that God…my strong man? I have had several visions of this man and he seems to be the same person and same happy spirit. I don’t remember all the details, like if he had a goatee or not. Most of my visions of this guy seem the same now with the short hair, but prior I was getting a man with a goatee and man bun. Not sure if he cut it off or one is the counterfeit.
Heard: These words I am discerning and asking the Lord for confirmation. I heard a woman say, “He’s Here, but he may not come the way God showed. Heard this around 12:45 pm June 22.
Heard and saw a vision of a man looking out at a country type view and I heard him say, “I’m trying, I’m trying. I felt he was talking to the Lord. This was also June 22 vision.

Dream: I dreamed I was first going with a friend who had a boyfriend now that she liked to a school she was going too and I went in uninvited with her and they were suspicious of me. Then we get invited to her brothers wife’s home for a party. It seems we were invited to many and it felt it was for a thanksgiving dinner or something like that. I only went to his wive’s party and my friend did not come yet, but I asked her how she was and I could tell she was less energetic and something was on her mind. I then had a vision of her side of the bed with blood in it. It was like she was keeping this from her husband, this sickness. I arrived early and she had to go somewhere bc she forget something and my brother was there on his laptop, it seemed he had no where to live and was living with others. She was gonna feed him. Also, a guy was there I used to like a long time ago (maybe to represent my future husband) and he liked me and I felt I was gonna be his wife.
Dream: I dreamed a guy was trying to get close to me at a job, and this job paid 14.50 an hour, but God showed his true side. The job seemed crooked also.

Vision of Invention: I see another invention where they created these clear type of films that were printed with patterns and you can stick them to your shoes to change the style of your shoes instantly. I hope this helps someone out there, this was a cool invention idea.