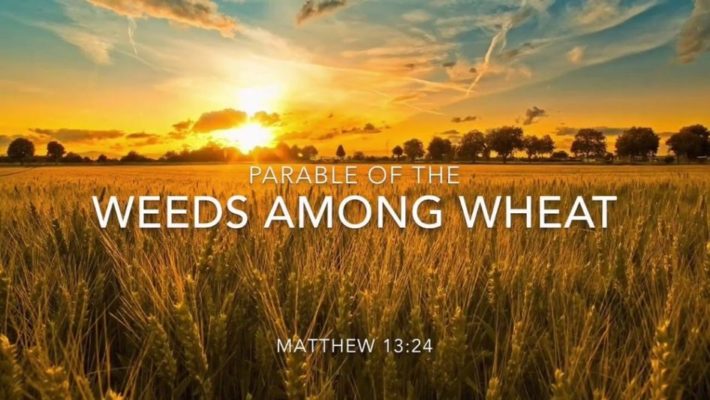 Before my last vision of Jesus washing his roots of his harvest, I saw a vision of weeds in his garden. They were light yellow in color in rows like the other visions were in rows also. I was unsure of this vision and if it was from the Lord or even important and so I wasn’t sure if I should add it. The vision I thought was the least important, was the most important one. God really wanted me to show it, because he gave me the parable to match it and he would not let me forget it, so I am now adding it. It’s amazing how all these series of visions match this parable below. Please pay attention as it is very important to the Lord for you. The tares and wheat in the fields grow together, but the tares are planted by satan. The tares or weeds have come by satan to try and destroy the harvest the Lord made, so they will be burned. It is so important to accept the Lord while you still have a chance to be the wheat and not the weed. He is giving you an opportunity, and believe me you don’t want to choose your own way or there is a consequence of eternity for not choosing Jesus. You think it’s just a silent death, maybe you should read his scriptures a little bit closer. It will not be that for those who reject him. He is looking for those who will love him and not reject his love and all he does for us. You do not have to be perfect or sinless to come to him, he is the one who will wash you clean and get you there with time. Just accept him as Lord, ask him to forgive your sins and watch him prove himself to you. He is the good shepherd and lays down his life for his sheep! Jesus spoke so much about this parable in Matthew 13, it was very important I can tell for him to show me a series of visions of this garden he harvested. Please be part of that harvest! There is more if you read all of Matthew 13. He also explained why he spoke in parables here. There was a reason not everyone would get to understand his parables…Everything on earth was a pattern of the Lord….can you not see it?  Are you a weed or his wheat?

Matthew 13:1-9 The same day went Jesus out of the house, and sat by the sea side. 2 And great multitudes were gathered together unto him, so that he went into a ship, and sat; and the whole multitude stood on the shore. 3 And he spake many things unto them in parables, saying, Behold, a sower went forth to sow; 4 And when he sowed, some seeds fell by the way side, and the fowls came and devoured them up: 5 Some fell upon stony places, where they had not much earth: and forthwith they sprung up, because they had no deepness of earth: 6 And when the sun was up, they were scorched; and because they had no root, they withered away. 7 And some fell among thorns; and the thorns sprung up, and choked them: 8 But other fell into good ground, and brought forth fruit, some an hundredfold, some sixtyfold, some thirtyfold. 9 Who hath ears to hear, let him hear.
Matthew 13:24-30
24 Another parable put he forth unto them, saying, The kingdom of heaven is likened unto a man which sowed good seed in his field: 25 But while men slept, his enemy came and sowed tares among the wheat, and went his way. 26 But when the blade was sprung up, and brought forth fruit, then appeared the tares also. 27 So the servants of the householder came and said unto him, Sir, didst not thou sow good seed in thy field? from whence then hath it tares? 28 He said unto them, An enemy hath done this. The servants said unto him, Wilt thou then that we go and gather them up? 29 But he said, Nay; lest while ye gather up the tares, ye root up also the wheat with them. 30 Let both grow together until the harvest: and in the time of harvest I will say to the reapers, Gather ye together first the tares, and bind them in bundles to burn them: but gather the wheat into my barn.
Matthew 13:36-42
36 Then Jesus sent the multitude away, and went into the house: and his disciples came unto him, saying, Declare unto us the parable of the tares of the field. 37 He answered and said unto them, He that soweth the good seed is the Son of man; 38 The field is the world; the good seed are the children of the kingdom; but the tares are the children of the wicked one; 39 The enemy that sowed them is the devil; the harvest is the end of the world; and the reapers are the angels. 40 As therefore the tares are gathered and burned in the fire; so shall it be in the end of this world. 41 The Son of man shall send forth his angels, and they shall gather out of his kingdom all things that offend, and them which do iniquity; 42 And shall cast them into a furnace of fire: there shall be wailing and gnashing of teeth.43 Then shall the righteous shine forth as the sun in the kingdom of their Father. Who hath ears to hear, let him hear.