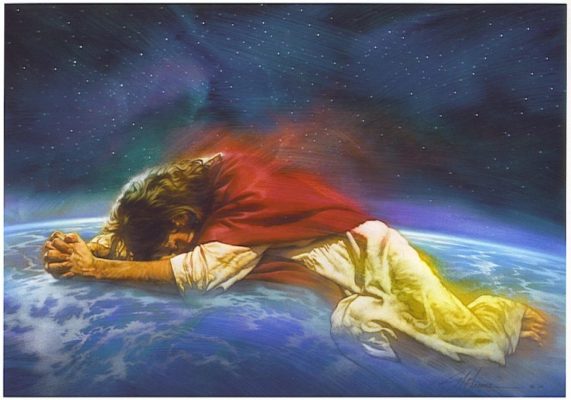 Vision: I had a beautiful vision of Jesus and he had his right hand raised towards the clouds. He had his head down and I knew he was calming the storms. He had his white robe on and a dark gray sackcloth on, but his hood was not up this time. The sackcloth was sleeveless, but his white robe had sleeves. I couldn’t remember what a sackcloth actually looked like in bible times so I looked it up, and that is what he had on exactly except it was dark gray. Possibly a sign of sadness too, but I have never seen Jesus with dark gray on. I found this on the web about why they wore sackcloth in the bible times. It’s amazing that he gave this message to his people that he is mourning and grieving over what is happening too. He also is the one calming the storms for his children, but possibly
his grieving was for those who won’t turn to him before it’s too late. Nothing can stop this storm but God and he wants his people to come back!
From the web: Sackcloth came to mean a garment, too, made from such cloth, which was worn as a token of mourning by the Israelites. It was also a sign of submission (1 Kings 20:31-32), or of grief and self-humiliation (2 Kings 19:1), and was occasionally worn by the Prophets. It is often associated with ashes.
————————————————–
Saw a word, but I am not sure exactly how it was spelled….Cohurt-COVID or Cohort-COVID…I am documenting, but tbh can’t remember what I saw exactly. COVID was at the end though and the first letter started with a C…was similar to what I wrote. (Update: I found Cohort online for COVID Surgeries for test patients, so this had to be the word God was revealing bc when I refer to the 4 back to back dreams of the world in chaos and low resources, there were surgeries involved. God was confirming the dream and the word – https://www.clinicaltrials.gov/ct2/show/NCT04323644)
Vision: I saw clouds peek through and then a hand tossing a coin up in the air.
Heard: Keeping Your Faith, 52 (heard this several times), Start In Transition or Starting Transition (Not sure what this is for, but God is starting transition for something)

Groceries and Stores Closing Down and if you saw all my past post, you see God was showing me all these food storage cabinets full of food and other things that came true regarding the virus causing chaos: I had two separate dreams. One was of a thrift store closing, but for some reason i got hired on and two young girls were being sent to another job bc they were not needed anymore. I believe I was only taking the position to help close it out. The thrift store was very dirty and all items were almost gone. The next dream was a grocery store and it was also a small store that left groceries in it for ppl to just come get for those needing food. I walked outside and there were ppl all around, and I knew from a vision in the dream I would see amazing things in the sky from God and I look and see a lion face in the clouds so clear with the sun beaming through the face. I told everyone, but no one paid attention to what God showed. I then see a lady I knew before and she had dark wavy hair, she looked like a lady I met at a job I worked at. She also had a baby. I asked her if she needed food and she did, so I guided her to the grocery store that was giving away all their food and shutting down. It was almost like she lost her husband from this virus.

I saw a cell phone and it had chinese writing all on while it was starting up on the screen and it was being updated with new fancy letter formats for texting and new images and emoji’s. One looked like a fancy e with curves in it. I think the whole phone was being updated/enhanced.
Dream: I saw a guy and girl couple who was in sync with everything and loved each other.
Dream: I saw a surfer lady making wood boards and selling it to ppl and I knew this was through hard times.
Vision: I saw a redhead in a portrait with a fancy copper type frame and she was on a swing it looked like with a long green dress up to half her neck with long sleeves. This looked like an older picture.

Cast Out Demons Dream:
I was sitting at a table with my sister TC and cousin AM, we were at a restaurant and no one else was there. I see my other sister TJ’s ex come in with my nephews dark clothes all bunched up and he pushed it at me and told me with anger something his son had did and was very angry about it. My nephew is in elementary school. I stood up out of my seat and said slowly…Do Not Push A Child of God and then instantly the demon manifested and it’s eyes started rolling, he was all of sudden hunched over and his face took a strange demonic form. I put my hand on him and cast out the demon a few times and after it left, he walked out of the restaurant with friends and was normal again. My cousin and sister was like what just happened. Demons are real people, and they have shown themselves to me many times. We have authority over them as a child of God. Did I take care of this in the spiritual world or will this happen in the flesh, that I am unsure of atm.