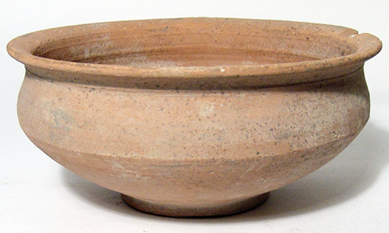 Vision: First, I saw Jesus sitting on something and his back was to me like he was putting on his sandals to get to work. Then I saw a second vision of him standing by one pot blowing into it. I look around and see many rows of white cooking pots on fire with ab 3 or 4 sticks holding them up from the ground. The image I show looks similar to it and it is a biblical period type pot, except it was white. I understood his message. The white represents his chosen children who are being purified, the fire represents the fire they went through for him and possibly still going through, the blowing was his winds or the holy spirit wind and he was getting ready to stir up the gifts in many of his children. You will know if this is confirmation for you.

I heard a message about his prophets to the people: Outsourcing the knowledge that he might be real (He outsources his knowledge to his prophets so ppl can see he is real)
I also heard: On To Something else…(God likes to do a new thing Isaiah 43:19).
Heard: It’s a main “can” quality implementation (We say we can’t, but God say’s “We Can”)
Vision: I saw myself with a dress on and no shoes. I was being moved from one thing to the next quickly and I was thinking …I wanted this to stay and then I wanted that to stay, but they did not and I was being moved a lot, then I heard “binary”

I felt a lot of these messages fall into the same category for his prophets or ppl operating in their gifts or called to go through refining fire, he is moving and he is going to stir up gifts even more in his children. It may get hotter before he establishes you on stable ground again, but it’s for a purpose and he is the one in control and moving us forward with him. Remember, there is an end to the fire and a season for everything under the sun. Only those close to the Lord, those fire seasons will produce fruit for a purpose. it won’t be in vain.
——————————————
Vision: I saw a man sitting behind like a TV screen or YouTube video talking to the audience. He had a red hat that said NFW and a red t-shirt on.
Dream: I saw my dad’s tooth fall out and then blood on his hand. Not sure if this is a spiritual meaning or something that really will happen. Time reveals all.
Heard something about my sister getting sick to where she would be in pain and I knew this was a message that he would use this to get her closer to him. I spoke with her after this and she actually said she was talking to God about keeping her on the right path the night before and to me this was confirmation he will do whatever means necessary to keep us close to him including putting us through the fire or pain. He knows what will work. The fact is, he responded to her through me and I had no clue ab her prayer.