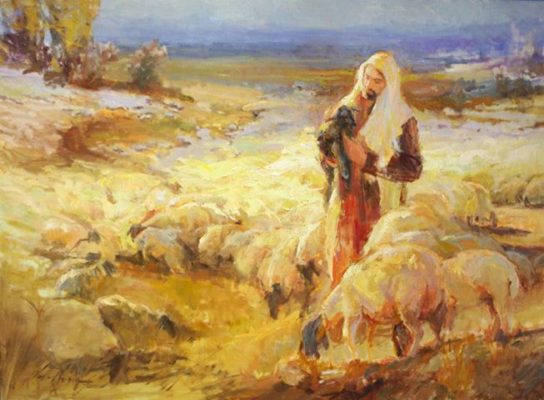 Vision: Jesus carrying me over his shoulder and I was a black sheep. I only saw the back of him while he walked away, but he had his white robe on and a tan sash with his hood down. It was very special to me, because I needed him more. This vision was confirmed by him so much and why he revealed it to me to share. First, my friend (The Wise Rodin) that same day, said something about being a black sheep and that can be a prophet before I even mentioned to him my vision. I keep telling him we are on the same spiritual branch lol. It can be a double meaning though according to various scriptures and can also mean someone who strays. For me I believe it was both. We are the outcast or oddball, misunderstood, and the one who is rejected by most religions for speaking from the Lord. Second, I literally saw an image of Jesus facing forward holding a black sheep that day before I got the vision and heard Jesus say, “This is for you.” This message from him was bc there has been a lot of rejection with my calling for me lately along with sad news and I just felt so defeated again that I was literally playing tug a war with God telling him I give up. He always wins though and when I surrender again, I feel his peace and love. I can’t be away from him if I tried and I am thankful he loves us that much to go after us. Most prophetic people are the outcast(black sheep) or the separated one’s, but this is part of our calling and Jesus taught us that through all other prophets going through a lot of testing. You have to be if your hearing the Lord and being his mouthpiece for him.  I know other’s in other callings may feel like this also and this is for you too.  He picks you up and carry’s you over his shoulder rejoicing when you can’t go on any longer or stray.  He accepts you when other’s don’t.  He is a good shepherd.

Luke 15:3 And he spake this parable unto them, saying, 4 What man of you, having an hundred sheep, if he lose one of them, doth not leave the ninety and nine in the wilderness, and go after that which is lost, until he find it? 5 And when he hath found it, he layeth it on his shoulders, rejoicing.

Isaiah 40:11 He shall feed his flock like a shepherd: he shall gather the lambs with his arm, and carry them in his bosom, and shall gently lead those that are with young.

“For he is our God; and we are the people of his pasture, and the sheep of his hand. To day if ye will hear his voice,” Psalms 95:7, KJV

John 10:27-28 27 My sheep hear my voice, and I know them, and they follow me. 28 And I give unto them eternal life; and they shall never perish, neither shall any man pluck them out of my hand.

“But when he saw the multitudes, he was moved with compassion on them, because they fainted, and were scattered abroad, as sheep having no shepherd.” Matthew 9:36, KJV

Vision: I saw a beautiful orange and yellow sky scene with Jesus on the cross kind of in the distance.

Words: I saw the words “Annoyed” and then I heard God say, “You will be annoyed” and this came true. I didn’t believe it at first, but after he said this I was so frustrated with things up until today.

Heard: Oxford Library
Saw the name: Reynor
Vision: Older lady eating cotton candy and she had very short wavy thick white hair.
Vision: I saw a screen with black and gray striped horizonal rows.
Heard: A Ding from facebook and I knew what it meant.