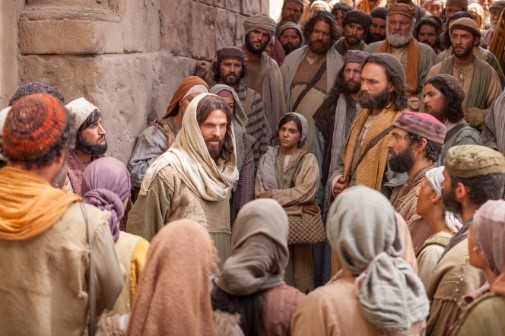 Jesus came to visit me the other night for a longer time and we even had conversations. He was in his robe and everywhere we went was crowds of people or lines of people. One place was where people were standing in line and I remember wanting to be close to him and I sat on the ground next to him. I believe I was holding his hand. The two speakers were evil and Jesus went out to address them in front of the crowd. The second place I remember we went too was like a retail store and there was a crowd again. Jesus was speaking to a women and I heard him say “Your a good women” but I am not sure if this was to me or her. He then laid down and we had a conversation about love and life. It’s like he was copying me, because I always talk to him deeper when I lay down. I was happy he spent so much time with me and I wanted to be so close to him everywhere he went. I loved this dream and know one day I will get to be like this forever with him. He sent on my door step a long time ago a message that said “You will be with me in Paradise” and it has stuck in my spirit since. Powerful words!

Luke 9:18-20
18 And it came to pass, as he was alone praying, his disciples were with him: and he asked them, saying, Whom say the people that I am?
19 They answering said, John the Baptist; but some say, Elias; and others say, that one of the old prophets is risen again.
20 He said unto them, But whom say ye that I am? Peter answering said, The Christ of God.
———————————————————–
Dream: My cousin had a women who was a witch wanting evil done to her, so my cousin asked me for help. I helped her learn about the gift of the holy spirit and speaking in tongues.
Dream: I dreamed my job was gonna make things more difficult or uncomfortable, so I was looking for another job.